It had been a long time since I visited Sultan’s Tent for Moroccan food. I’d been there way back in the day when they were still on 17th Ave SW.  Recently my friends were telling me how they were fighting over the last piece of potato on their last visit so I was intrigued as to how good the potatoes really were at Sultan’s tent.  When they decided to go back again for a second visit, I decided to tag along.

I love the ambience with all the tapestries at Sultan’s Tent. It really makes you feel like you’re in a land far, far away and dining inside a tent.  I would say Sultan’s Tent one of the few “experience” dining destinations in Calgary. The whole set up is very authentic at Sultan’s Tent. They encourage you to eat with your hands. As such, before the food arrives, they will come around with a wash basin and you hold your hands over the basin while water is poured over them.  At the end of your meal, they will come around to do the handwashing ritual again.

At Sultan’s Tent, you can either order à la carte or opt for one of the Sultan’s Feast, which is a multi-course dinner. On this visit, we opted to order a bunch of items on the à la carte menu to share.

For appetizers we ordered the assortment of traditional Moroccan vegetable salads which included felfla (broiled green peppers and tomatoes seasoned with spices and cilantro), carrots, potatoes, and beets. We also ordered b’stilla royale which was a pastry containing chicken, eggs, onions, ginger, saffron, and almonds and the top was lightly dusted with powdered sugar and cinnamon. 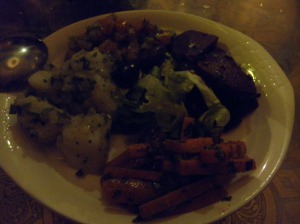 The assortment of traditional Moroccan vegetable salads was served with Moroccan bread which was used to help scoop up the food. I discovered the Moroccan potato salad, which was part of the salad assortment, was the potato dish that my friends were raving about. The Moroccan potato salad was coated in a light vinaigrette and mixed with some minced onion and parsley. For me personally, I thought the potato salad was just ok as I’m not a big fan of raw onions. I did enjoy the other items in the salad assortment. The felfla remind me a lot of Italian bruschetta. The spiced carrots were toothsome and coated in a light vinaigrette with hints of cumin and paprika. Like the other salads in the assortment, the beets were marinated in a light vinaigrette. Personally, I thought all of the items in the salad assortment tasted pretty similar. 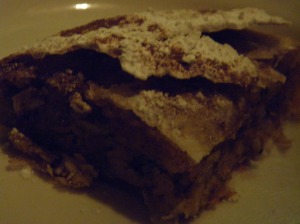 Next came the b’stilla royale. I wasn’t sure what to think when I saw the description on the menu as I couldn’t imagine chicken and onions going well together with powdered sugar and cinnamon. To my surprise is actually worked really well. I loved the crispness and flakiness of the phyllo pastry on the outside. The filling of the b’stilla royale was a medley of flavours. I must admit that I couldn’t really taste the chicken as it was well-blended with all the other ingredients. I definitely could pick out the texture of the almonds in the mix.  The one thing to remember when eating the b’stilla royale is to try to not inhale the cinnamon and powdered sugar while eating it. Otherwise, you end up momentarily choking on the whiff of cinnamon.

For mains, we ordered the saffron beef tagine and the couscous mergez. Both dishes were served in the traditional clay pots known as tagines.  The tagine pot consists of two parts – a circular flat-bottomed base with low sides and a cone-shaped cover that rests on top of the base during cooking. The shape of the cover is designed to return all the condensation to the base during cooking thereby keeping the food moist.

The saffron beef tagine was served with preserved lemons, olives, and vegetables. The beef was very flavourful and melt-in-your-mouth tender. I really enjoyed the preserved lemons and thought to complemented the dish well.

The couscous mergez consisted of spicy lamb sausages and vegetables served on top of a bed of couscous. I was really surprised at how tender and flavourful the mergez sausages were. And the best part was that they were pretty lean and not greasy at all. The couscous mergez was served with a side of harissa sauce, which is a North African hot chili sauce. The harissa sauce was the perfect condiment for the couscous as it helped to kick the flavours up a notch. The couscous mergez is certainly a dish I would order again on my next visit!