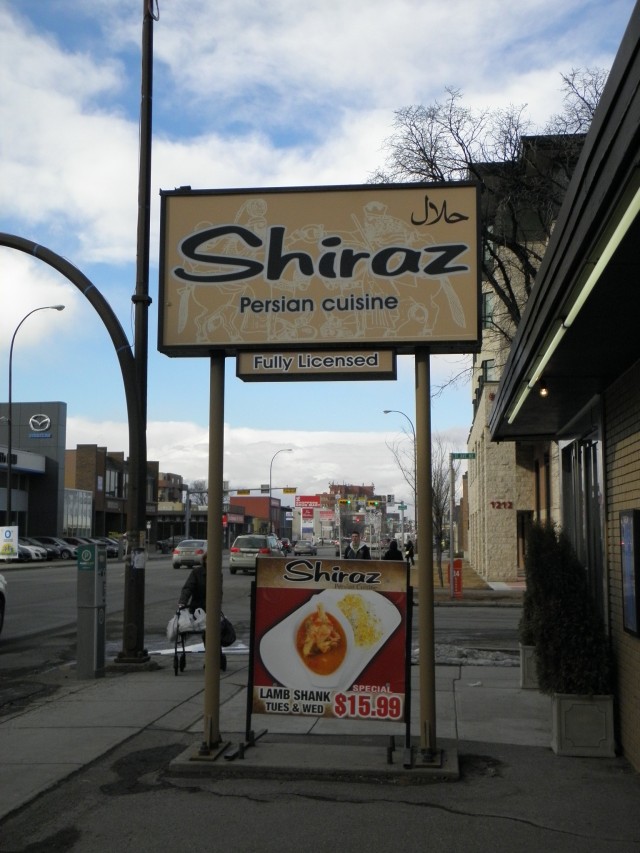 The first time  I ever tried Persian kababs was at Paradise Kabab House in Redwood City, California last summer. Ever since then, I have been craving kababs and have been on the look out for Persian restaurants in Calgary.  I’ve been trying to find a Persian restaurant in Calgary that makes kababs just as tasty as the ones I had at Paradise Kabab House.  I’ve driven past Shiraz Persian Cuisine on Centre Street tons of times and have been curious how their food is compared to other Persian restaurants around town. Finally, I had the opportunity to go and check it out recently.

I went there with my friend for an early dinner on a weeknight before a hockey game.  The restaurant was pretty quiet when I got there.  I was actually surprised at how spacious and contemporary the decor was.  It was certainly very different than most Persian eateries I’ve been to. Upon arrival, I was greeted by the owner, who was also our server for the evening.

As an appetizer, we shared the Dolmeh ($4.99) which consisted of grape leaves stuffed with rice, chopped onions, dill weed, olive oil, mint and spices. The dolmeh were served warm with some hummus, which is a dip made of garbanzo beans, tahini sauce (sesame seed paste), olive oil, garlic and fresh lemon juice.  The dolmeh were tasty, tender,  and flavourful and went nicely together with the hummus.

For our entrees, I ordered the Kabob-e-Koobideh ($12.99) which consisted of two skewered and broiled koobideh kabobs, made of ground beef with minced onions and Persian seasoning. My friend ordered the Vaziri ($19.99) which consisted of one chicken breast and one beef koobideh, skewered and charbroiled. For me, on a first visit to a Persian restaurant, I always order the koobideh as I want to use this dish as a comparison to others that I’ve tried. It also happens to be my favourite Persian dish. 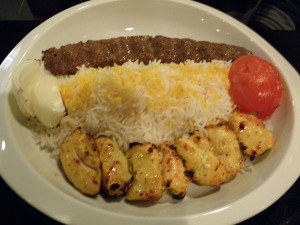 The service at Shiraz was top-notch. The owner was very friendly and helpful. He took the time to explain the menu to us and also explained all the components of each dish when he brought it out to us.  He even explained what the container of reddish-brown powder was at the table and how to consume it. As it turns out, the reddish-brown powder was ground sumac. Sumac is a shrub that produces reddish-brown berries. These sumac berries contain the reddish-brown seeds which are usually ground up and used as a condiment. The sumac has a sour flavour and is commonly used in Persian cuisine to enhance the flavours of the food.

Overall, I really enjoyed our dining experience at Shiraz. The service we received from the owner really made this experience memorable.  I hope when I return next time the koobideh will have more charbroil flavour.