Ever since returning to Calgary earlier in the week from my San Francisco trip, I’ve been craving koobideh again. I decided to hit up Atlas Speciality Supermarket & Persian Cuisine to see how their version of koobideh compares to the one I had from Paradise Kabab House in Redwood City, California. 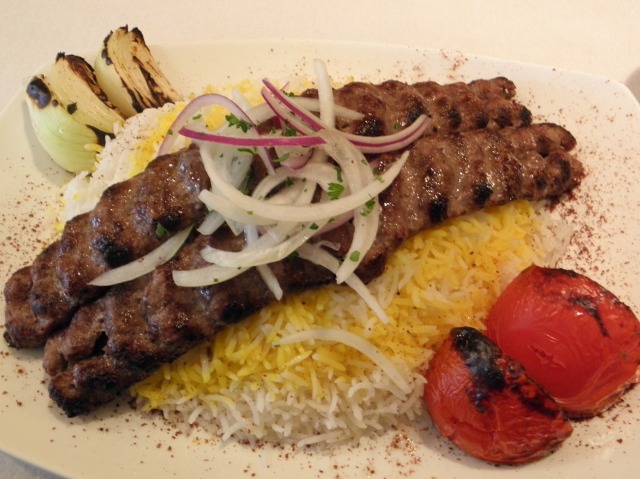 I ordered the full order of the Koobideh Kabob ($11.50) which consisted of two flame broiled grade AAA ground beef kabobs served with saffron rice, roasted tomatoes and roasted onions. There is also a half order available for $6.99 which consists of one kabob instead of two.

The Koobideh Kabobs at Atlas were well-seasoned and flavourful although they were not as juicy and tender as the ones from Paradise Kabab House.  I think the difference is that the kabobs at Atlas contained only ground beef whereas the ones from Paradise Kabab House were a blend of ground beef and onion. Perhaps, the onion blended into the beef gave it more moisture resulting in the kabobs being more juicy and tender.  Don’t get me wrong, the ones from Atlas were still tender and tasty. They just were not as good as the ones from Paradise Kabab House.  The saffron rice at Atlas was a little drier than the rice at Paradise. This may be due to different techniques in cooking the rice.  Also, the tomato from Paradise was grilled a little longer so it was a little more cooked through and tender than the one at Atlas.  I would still say that the grilled tomatoes at Atlas is one of the better versions I’ve had in Calgary as I’ve found many places do not grill the tomatoes long enough so the tomatoes are still practically raw in the center. Overall, the koobideh at Atlas is one of the best versions I’ve had in Calgary as it is well-seasoned and has some good grill flavour. I would go back to Atlas to satisfy my koobideh craving in the future.