Since JoJo’s has been back in action this past week with her “new and improved” chariot and has acquired a new ‘cookshack’ smoker, I wanted to visit again. This time I was determined to try the smoked chicken as I found out recently that it’s been added to the regular menu. When I first visited JoJo’s a couple of months back, the smoked chicken was not available yet.

Yesterday, JoJo’s BBQ Chariot was parked at her regular location again like before, the parking lot of Barbecues Galore on Edmonton Trail NE. I arrived just before noon and luckily there was no line up yet. For the most part, the menu is pretty much the same as before, except for the smoked chicken which has been newly added. I did also notice though that the prices had gone up a bit for a bunch of the items. 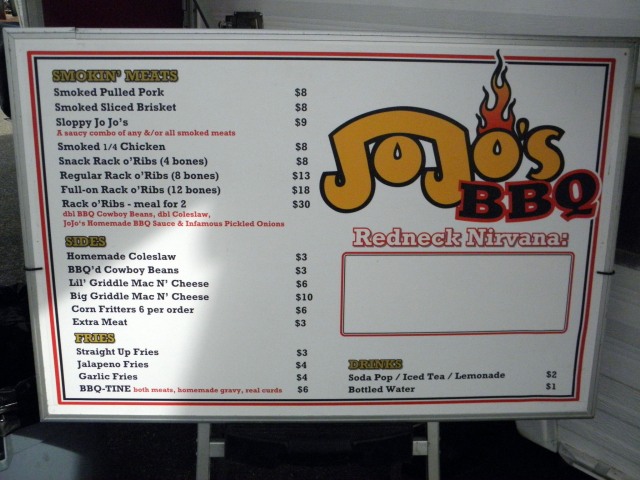 Of course, I ordered the Smoked 1/4 Chicken ($8). This was the item I’ve been longing to try from JoJo’s as I was always a big fan of the Smoked Chicken at Palomino’s in the past. Since the owner of JoJo’s, Jody Barned, was formerly the “Pit Boss-Lady” and “BBQ Queen” of Palomino Smokehouse and Social Club, I was curious how this version of smoked chicken would compare to the one that I loved from Palomino’s. JoJo’s Smoked Chicken was delicious! The meat was succulent and moist. The flavour was bold and smoky. In terms of taste, this version was slightly different from the version at Palomino’s, from what I can remember. I can’t quite put my finger on it as it’s been awhile since I’ve been back to Palomino’s but I know it’s not exactly the same. I think there’s a chance the one at Palomino’s is done with a dry rub whereas JoJo’s version seems a lot wetter. Nonetheless, this version from JoJo’s is still very tasty and I would definitely order it again on my next visit.

I also had an order of the Corn Fritters ($6 for 6 pieces). I was surprised that the corn fritters looked different this time than what I had remembered. At first, I thought it might have been my imagination but as it turns out when I looked back at my previous post on JoJo’s, the Corn Fritters do indeed look different. I remember the previous version I tried from JoJo’s reminded me of falafels as they were much darker and grainier in appearance.  Looks like they’ve been tinkering with the fritter recipe. Texture-wise, I think this new version is closer to the texture that I’m used to associating with fritters.  These new Corn Fritters are really tasty and addictive! Though I like this new version a lot, I think I like the previous version a wee bit more as they were more unique.

Overall, I really enjoyed both the Smoked Chicken and the Corn Fritters. I’d like to go back to try some of the other items like the ribs and the smoked brisket to see how they compare now that they are being done with the new smoker.