Since I was really impressed with the dinner that I had at Good Choice Restaurant during my visit to Vancouver earlier this summer, I was curious how their dim sum fared. Hence, during my trip to Vancouver in October, I decided to go check it out with a couple of friends.

We started with an order of the Deep Fried Egg Plant wrapped with Shrimps ($3.95). I was pleasantly surprised at how well this dish was executed. I’ll be first to admit that I hate mushy eggplant so I was pleased that the eggplant was firm and toothsome. The dish was flavourful and the minced shrimp had a nice texture to it. Overall, I would say this is one of the better versions of this dish that I’ve had. 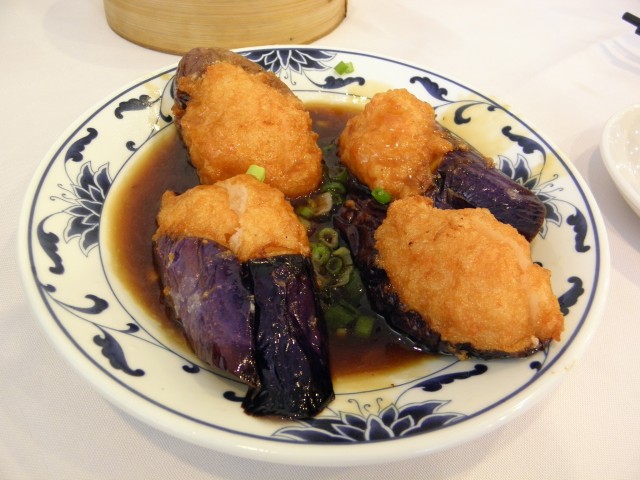 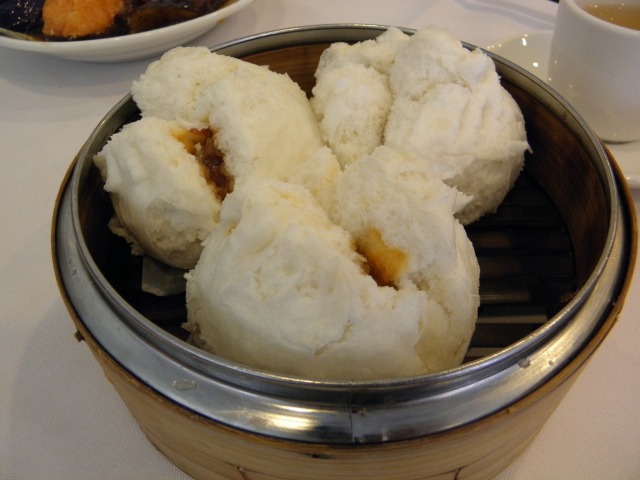 We also ordered the Spicy Sampan Style Fried Rice with Chinese Sausage ($11.80). This turned out to be one of our favourite dishes. The rice was perfectly fried. as the rice grains were firm, distinct, and had a nice chew to them. I really liked the crispy bits, especially the fried shallots. This was one of the best versions of fried rice that I’ve had in a long time. Even though this dish is supposedly spicy, I didn’t find it to be spicy at all so don’t be concerned about it being overly spicy. Just make sure you avoid eating the odd dried chili here and there and you’ll be fine. 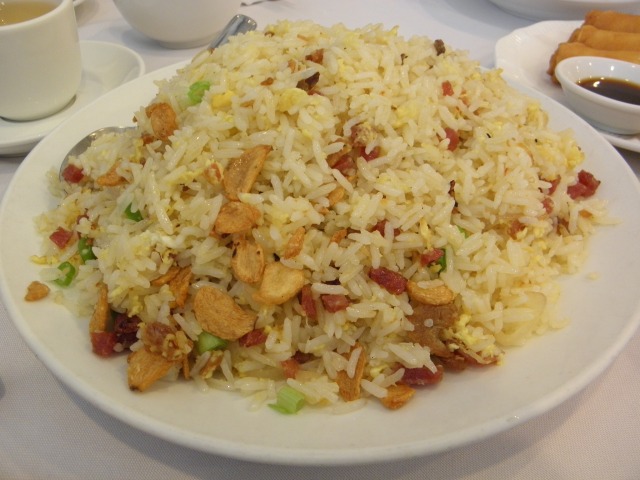 Next were the Shrimp Spring Rolls ($3.75).  These were well-executed as they were  not greasy and the wrapper was really crispy. They were definitely one of the better versions that I’ve had. 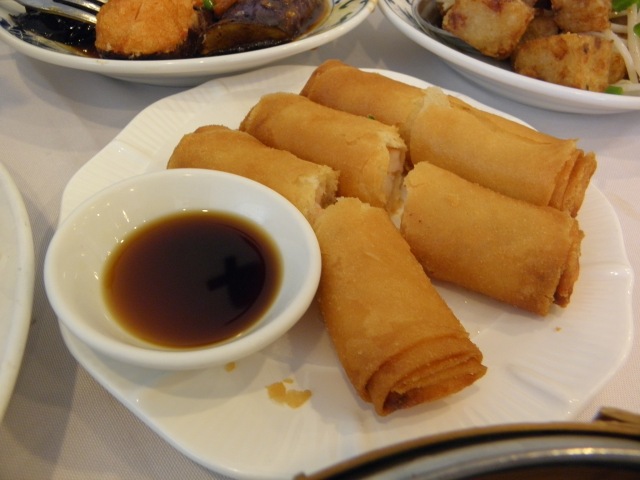 My other favourite was the Stir Fried Radish Cake in Spicy XO Sauce ($5.25). Very few places prepared the radish cake this way. I like how they cubed the radish cake so it leaves for more surface area to be fried and become crispy. This dish reminded me of my favourite dim sum dish in the San Francisco area, the Chiu Chow style Sautéed Taro Root Cake at Hong Kong Lounge. Interestingly enough, I haven’t found any place in the Vancouver area thus far that prepares their taro root cake Chiu Chow style. So this crispy Stir Fried Radish Cake is a great alternative for me. 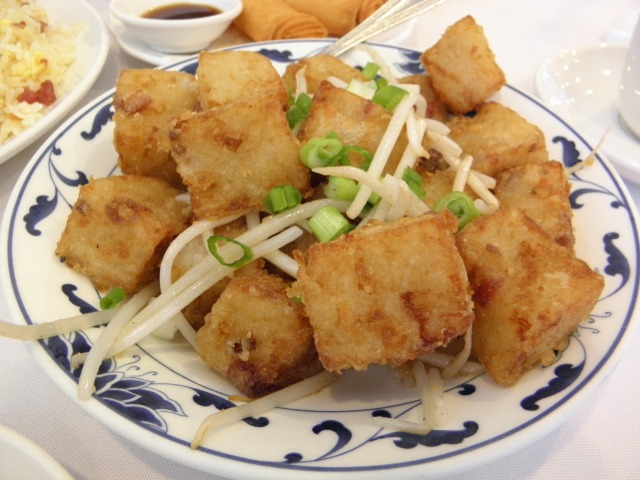 The dish that I really wanted to try was the Steamed Spareribs & Rice Noodles in Black Bean Sauce ($5.25).  The reason I really wanted to try this dish is because I had heard that they use a special rice noodle in the dish known as Chan Chuen Fun (or Chan’s Village Noodle). This special rice noodle has the appearance similar to Cheung Fun (rice noodle roll) but has no stuffing. It is translucent in appearance and has a slight springy, chewy texture to it. We were slightly disappointed as the dish was not very flavourful.  I also noted that black beans were nowhere to be found in the dish despite them being mentioned in the name of the dish. We also wished that there would be more sauce as the noodles were on the bland side. For those noodle pieces that actually absorbed enough sauce, they were pretty tasty. 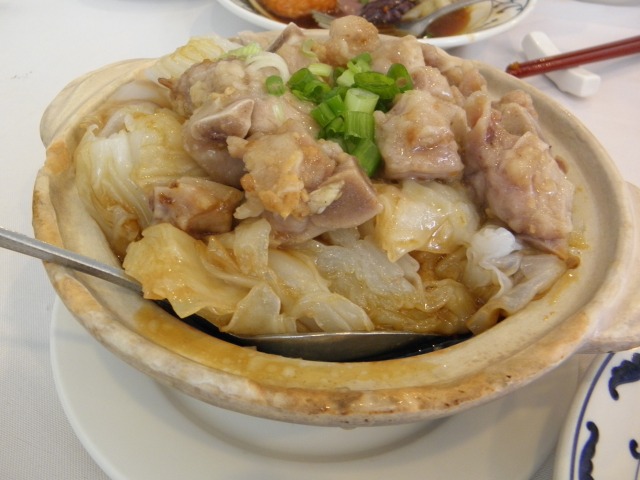 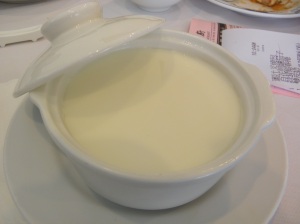 For dessert, my foodie friend Grayelf ordered the Double Layer Steamed Milk ($3.50). I had a taste of it and it was silky and smooth, just as before when we had it during our dinner earlier this year.

We were so impressed with the food that my friend K decided to choose Good Choice for dim sum meetup with her friends the following week, especially since Good Choice was willing to take reservations and we had a large group.

Because there were around 10 of us on this second visit, we had a large enough group to try many of the items on the menu. Again, we started off with the Spicy Sampan Style Fried Rice with Chinese Sausage ($11.80) and the Deep Fried Egg Plant wrapped with Shrimp ($3.95), Both of these dishes were as good as our first visit and a big hit amongst my dining companions. 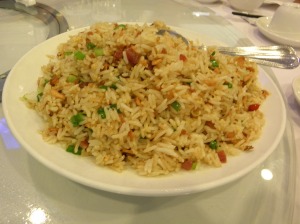 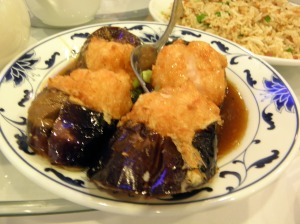 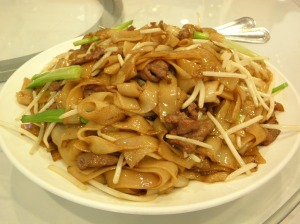 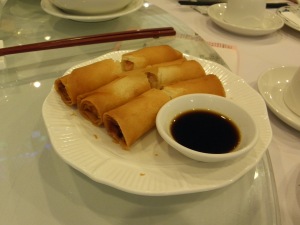 One of our dining companions wanted to try the Clams with Black Bean Sauce ($5.95) and also the Beef Tripe & Tendon in Special Sauce ($3.75). The Clams with Black Bean Sauce were one of the least favourite dishes amongst my dining companions on this visit. A few of us at the table commented that the clams tasted fishy and even though the black bean sauce was flavourful, it couldn’t really mask the fishy taste. The Beef Tripe & Tendon tasted ok though I’m normally not a fan of offal. 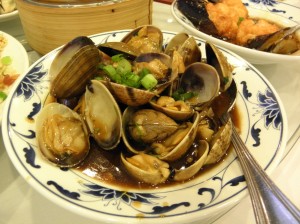 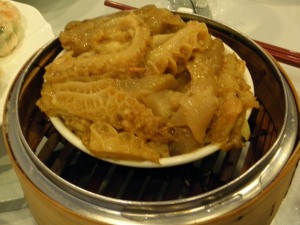 Next up were the Pan Fried Chive Cake ($3.95) and the Steamed Shrimp Dumplings ($3.95). I thought the Chive Cake was just ok. The Shrimp Dumplings were very large. They tasted fine but were not particularly outstanding. (There are actually four to an order. One of my dining companions had snagged one before I managed to get a picture.) 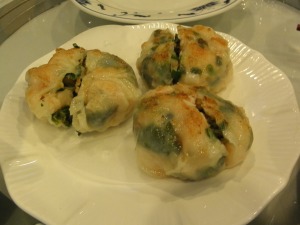 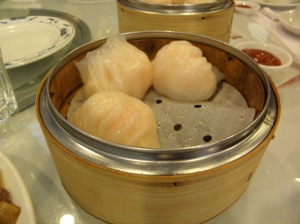 Then came Stir Fried Radish Cake in Spicy XO Sauce ($5.25) and the Deep Fried Sticky Puff with Minced Meat ($3.25). The Stir Fried Radish Cake was just as tasty as before. Many of my dining companions liked this dish. The Deep Fried Sticky Puff (also known as haam sui gok) was another of the least favourite dishes amongst my dining companions.  We found the puff to be too dense and doughy and the exterior was actually quite hard. 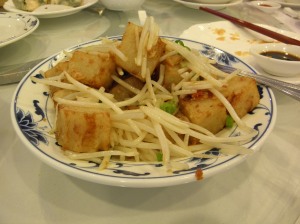 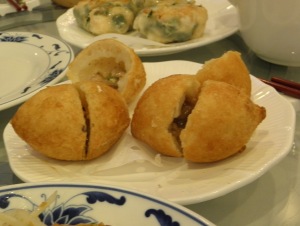 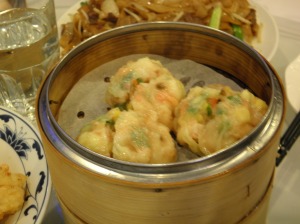 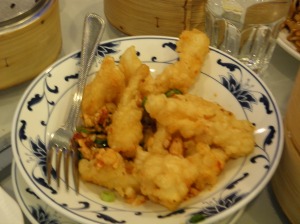 For dessert, we ordered the Mini Egg Tarts ($3.25). These were by far the most memorable item from this dim sum visit. I’d never had such good egg tarts in a long time.  They were freshly made and still warm when they arrived at our table. The pastry was so light and flaky and just melted in my mouth. Even a few of my dining companions who are normally not fans of egg tarts were sold on these.  They disappeared so quickly that we ended up ordering a couple more orders of these. 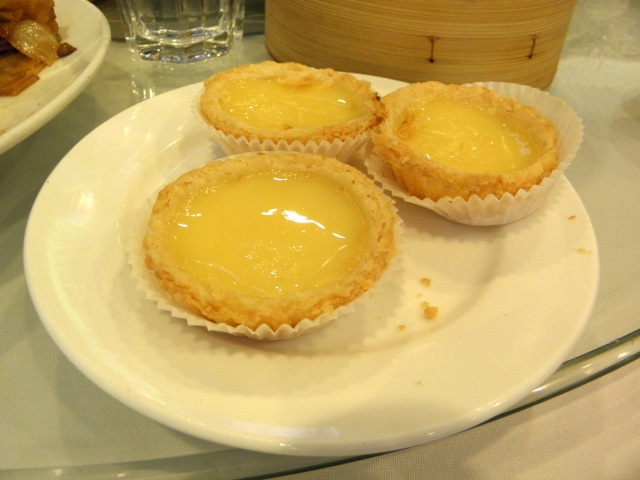 I liked the Egg Tarts so much that I had to return to Good Choice again for dim sum when I was back in town for a visit in November as I couldn’t stop thinking about them. This time there were 6 of us and after our two visits in October, we had a pretty good idea of which dishes we thought were consistently executed really well and which to avoid.

Of course, we started off with the Sampan Style Fried Rice and the Deep Fried Egg Plant with Shrimp again. Both were just as good as we remembered them to be. 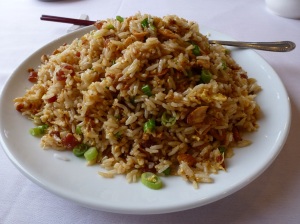 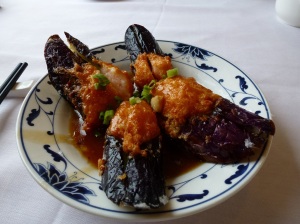 This time we decided to try a few new dishes that we haven’t tried before. We ordered the Pea Shoots with Gingko & Bean Curd ($6.95). I can appreciate this dish for what it is as it was prepared Cantonese style so the flavours were more subtle. I thought the dish was prepared well and the gingko nuts were toothsome. However, a few of my dining companions thought the sauce was a little on the watery side. The other item we tried was the Steamed Sticky Rice with Dry Scallop ($3.95). I thought the Sticky Rice steamed in the lotus leaf was well-executed. The rice was moist, soft, and gooey as it should be. I could taste the subtle fragrance from the lotus leaf. This was certainly one of the better versions of Steamed Sticky Rice that I’ve had. 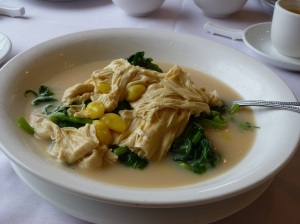 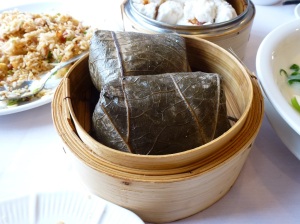 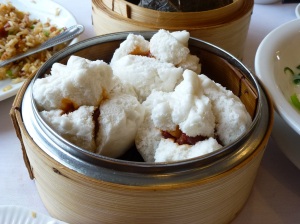 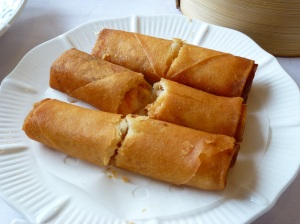 We also ordered the Stir Fried Radish Cake in Spicy XO Sauce again as it is one of my favourites. One of my dining companions wanted to try the Steamed Beef Balls ($3.25). I’m usually not a fan of this dish as I typically find the beef balls to be too springy or rubbery but to my surprise these Steamed Beef Balls were actually very soft and had a nice texture to them. This is definitely one of the better versions of Steamed Beef Balls that I’ve had. 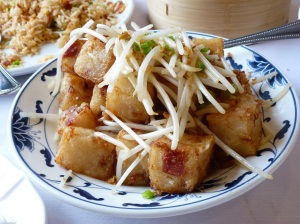 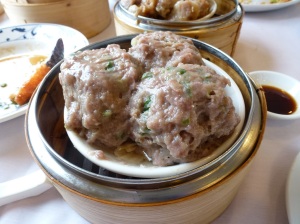 We also tried the Steamed Spareribs with Pumpkin ($3.75). I was pleasantly surprised that the spareribs were pretty flavourful and not too fatty. We all agreed that this would be a dish we would order again on our next visit. Of course, we finished our meal with a couple of orders of the Mini Egg Tarts. They were just as good as the ones we had on our previous visit. Again, they were served warm and the pastry was very light and flaky. 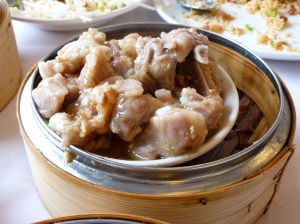 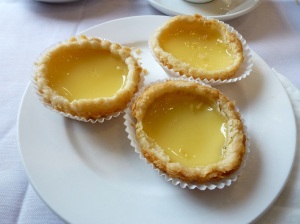 From our three visits, we definitely sampled a good portion of the dim sum menu at Good Choice. And for the items that we have found that they execute well, we’ve been impressed at how consistent they are with the execution. To me, by far, the standouts are the Spicy Sampan Style Fried Rice and the Mini Egg Tarts. I have yet to come across another place that executes these items as well as Good Choice.