Here are the top 10 favourite things that I ate in the Greater Vancouver area over this past year no particular order: 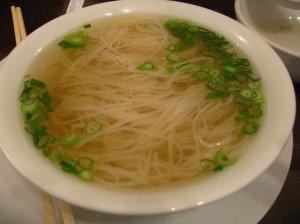 To me, the Pho Ga Don (deep-fried chicken with rice noodle in soup) from My Chau is the ultimate comfort food.  I could eat this every day if I lived in Vancouver. The Pho Ga Don (chicken pho) at My Chau is unique in that the chicken is served separately from the noodle soup. I love the taste of their noodle soup. The chicken-based broth of the Pho Ga is lighter than the typical beef-based broth of Beef Pho (Pho Bo), yet it is surprisingly flavourful. The rice noodles are cooked perfectly every time.  As delicious as the Pho Ga is, interestingly it is not the star of the show. The star is actually the leg of fried chicken.  The fried chicken is served with a bowl of dipping sauce (nuoc cham).  The skin of the chicken is so thin and crispy while the chicken meat is so juicy and tender. What is also impressive is how consistent the Pho Ga is at My Chau.  The Pho Ga on each of my visits has been as memorable as the one from my first visit.

When I think of wine chicken, Long’s Noodle House automatically comes to mind. I have not found another place that makes wine chicken as delicious as Long’s. There is something unique about the wine broth that the chicken is poached in. The wine broth is rich and complex in flavour. I’m most impressed at how flavourful and tender the chicken pieces are. I like that Long’s serves this dish slightly warm or lukewarm instead of ice-cold straight from the fridge like many other places do. The delicate flavours of the wine poached chicken aren’t as pronounced when it is served too cold.

The Aburi Salmon Oshi Sushi is one of the signature dishes at Miku.  It is by far my favourite dish on the Miku menu. The Aburi Salmon Oshi Sushi consists of rice and local salmon pressed in a wooden mould and dressed with Miku sauce. Each piece is topped with black pepper and a thin slice of jalapeno. To me, of all the different types of fish that could be flame-seared or done Aburi-style, I find flame-seared or Aburi salmon to be the most interesting and unique. The searing with the torch actually changes flavour characteristics of the salmon. Aburi salmon actually tastes more creamy and buttery than regular salmon and has a smoky charcoal flavour to it. The freshly cracked black pepper along with the thinly sliced jalapeno adds just the right amount of heat to balance the creaminess of the seared salmon.  There is a perfect blend of flavours in every bite. I’d definitely recommend heading to Miku to try this dish out. 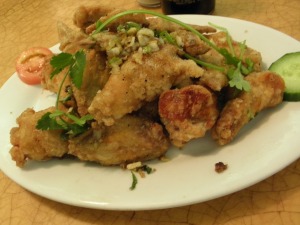 One of the dishes Phnom Penh is best known for is their Garlic Chicken Wings. These wings have been mentioned on numerous foodie lists time and time again. What makes these wings so addictive is the secret family recipe they use for the batter. The batter is always crispy and light and the seasoning is a combination of salty sweet flavours. The fried garlic bits mixed in further enhances the complexity of the flavours.  The deep fried chicken wings are served with a side dish of fresh lemon and pepper dipping sauce.  For those that want the extra tanginess, the dipping sauce gives it the extra burst of flavour. For me, I don’t even think the sauce is necessary. I usually enjoy my wings without the sauce. 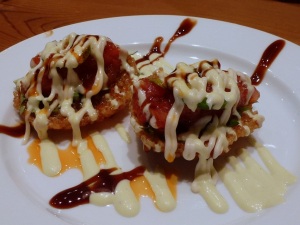 I had heard a lot about this signature item at Sushi Kimura – the Spicy Tuna Sashimi on Crispy Rice. I didn’t know what I was missing out on until I tried it for the first time recently for lunch. The reason I never tried it sooner is because I always go for the omakase at dinner and never order a la carte. The Spicy Tuna Sashimi on Crispy Rice is almost like a Japanese version of a crispy taco. The crispy sushi rice cracker is topped with finely chopped spicy tuna sashimi and slices of jalapeno and is finished with a variety of sauces. After the first bite, I knew what all the hype was about as it was like a flavour explosion in my mouth. 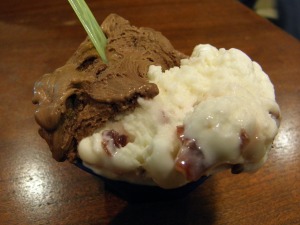 At Meat & Bread, the porchetta sandwich is the star of the show. In assembly line fashion, the porchetta roast gets sliced and chopped up. The golden crackling is chopped separately and evenly distribute amongst the meat. The chopped porchetta pieces are then loaded on to sliced ciabatta buns and topped with dollops of salsa verde. I’ve tried many porchetta sandwiches before but I think this is definitely one of the best porchetta sandwiches that I’ve ever had. I liked that the meat was diced up into bite size pieces with the golden bits of crackling evenly distributed so you get a crispy bit every couple of bites. The meat was moist, tender, and flavourful. The herbaceous salsa verde helped to cut the fat so the porchetta didn’t taste overly greasy. And the ciabatta bun was the perfect vehicle for this sandwich as it still held up well after soaking in all the juices from the porchetta.

On the surface, fish tacos seem like such a simple item but yet, it is so hard to find a well-made version here in Canada. The Fish Taco from the TacoFino Food Truck consisted of tempura battered ling cod that was topped with chipotle mayo, shredded cabbage and salsa fresca and served on a fire toasted flour tortilla. The tempura crust was perfectly light and crispy while the ling cod was tender and cooked perfectly. I loved the brightness of flavours in the salsa fresca. It provided the perfect contrast against the creamy chipotle mayo and the crunchy shreds of cabbage. I was also impressed that the flour tortilla was very light, soft, and not doughy at all.  All in all, this Fish Taco was perfect and definitely the best fish taco I’ve tasted so far here in Canada. I know the purists may say that the fish should have been grilled instead of battered and it should have been served on a corn tortilla instead of a flour tortilla but I didn’t think that these aspects detracted from how good this fish taco tasted. 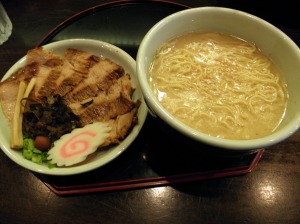 When I think about which was the best bowl of ramen I had in 2011, this Toroniku Shio Ramen from Hokkaido Ramen Santouka comes to mind. The shio broth was rich, milky, and delicious. I was surprised despite the richness, it didn’t seem oily at all. I was really impressed with the delicate flavours of the broth. Apparently, the pork broth at all the Ramen Santouka locations are made to exacting standards, which include simmering the pork bone and pork rib broth for two whole days before adding vegetables, dried fish, kelp, and other secret ingredients. The noodles were perfectly al dente, just the way I like them. My other favourite part of the dish was the the toroniku (special simmered pork jowl/cheek). This was my first time tasting pork cheek and it was not like anything I’ve ever tasted before. It was well-marbled, flavourful and melt-in-your-mouth tender. For all pork lovers, the toroniku is definitely a must-try item! 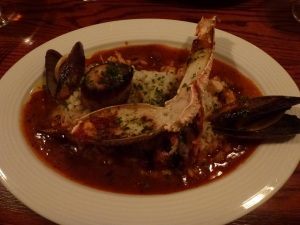 It has been such a long time since I’ve been wowed by a risotto dish and this one really did it for me. The risotto was perfectly al dente and the flavours were amazing. The seafood, which consisted of a seared scallop, mussels, a king crab leg, prawns, and fish, was perfectly cooked. What really made the dish special was the delicious tomato-based sauce. It tied all the elements of the dish together.  The flavours were bright and complex.