I was really stoked to have scored a reservation for CHARPOP, Calgary’s first temporary/pop-up restaurant earlier this week.  The pop-up restaurant was running for three nights only, January 15-17, with two dinner seatings per night. The event was hosted by CHARCUT Roast House‘s co-chefs and co-owners Connie DeSousa, and John Jackson, who teamed up with local artisanal baker, Aviv Fried from Sidewalk Citizen Bakery as well as offal and charcuterie master Grant van Gameren, formerly of Toronto’s award winning The Black Hoof Restaurant.

The “secret” location for this event, as it turned out, was at Aviv Fried’s bakery. When I arrived, I was surprised to find that there were only 36 seats per seating, for a total of 216 seats over the 6 dinner seatings. It’s no wonder they were booked up within minutes after they started accepting reservations.

As I had anticipated, the menu featured many dishes containing offal. Normally, I’m not an offal fan but I thought this was the perfect opportunity for me to step out of my comfort zone and try dishes I would normally be hesitant to try. The menu was divided into four sections – side dishes for $12, small plates for $17, large plates for $38, and dessert for $12. 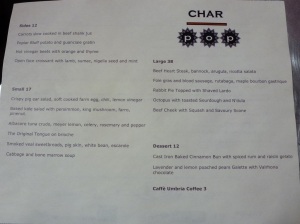 We started off with the Smoked Veal Sweetbreads ($17). The sweetbreads were served with pig skin, white bean, and escarole. The smoked sweetbreads were fried till they were slightly crispy on the outside. They were creamy and tasted amazing. The white bean medley was perfectly al dente and paired really well against the smoky sweetbreads both in terms of flavour and texture. To my pleasant surprise since I’m not a fan of offal, this was actually one of my favourite dishes of the evening.

My friend wanted to try the Baked Kale Salad ($17), which was tossed with persimmon, king mushroom, farro, and pinenuts. The kale salad was tasty and I really enjoyed the contrasting textures and flavours from the different components. The king mushroom slices were marinated and slightly tangy in flavour while the farro and toasted pinenuts were crunchy. My friend loved this kale salad. In fact, she liked it even more than the Smoked Sweetbreads. For me, I thought the Smoked Sweetbreads had the wow factor. 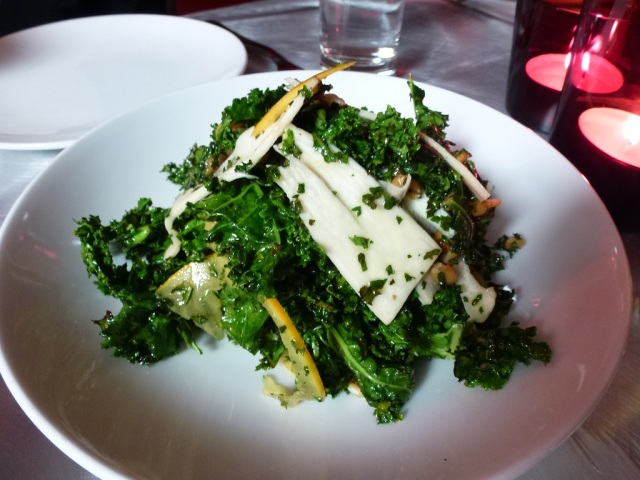 For our first side, we tried the Open face croissant ($12), which was topped with lamb, sumac, nigella seed, and mint. This turned out to be our least favourite dish of the evening. It wasn’t quite what we had expected as the lamb was a little on the dry side and the croissant was not as flaky and soft. In fact, we found the croissant to be quite heavy, hard, and chewy so we were a bit disappointed. 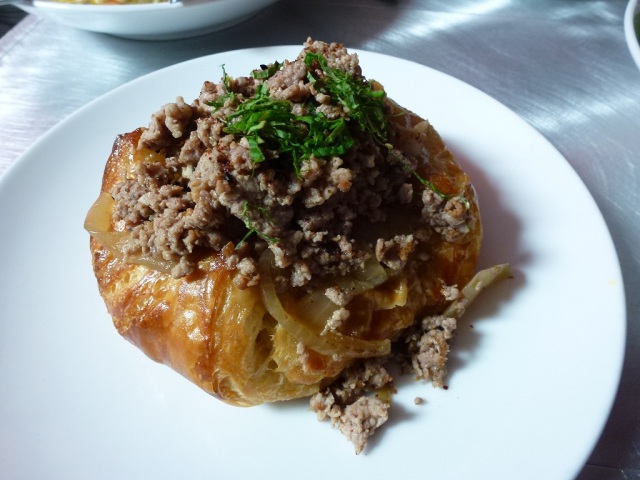 Our second side was the Poplar Bluff Potato and Guanciale Gratin ($12). The potato gratin was creamy and rich. Though I couldn’t taste much of the guanciale, I thought the potatoes were flavourful and delicious. My friend really enjoyed the potatoes though I did think it was a little on the pricey side at $12 for what we got.

For my main, I had the Foie Gras and Blood Sausage ($38), which came a rutabaga puree and a maple bourbon gastrique. The blood sausage was a lot softer in texture than I had anticipated. It was actually quite velvety, rich, and almost pudding-like. The star of the show was definitely the Foie Gras that was perfectly seared and served on brioche toast. The rutabaga puree provided a subtle sweetness and silky texture to the dish. The maple bourbon gastrique along with the thyme garnish is what really elevated the dish to the next level. I loved how the tanginess of the gastrique played against the richness of the Foie Gras. For me, the Foie Gras along with the gastrique was the standout item of the evening.

My friend had the Beef Cheek with Squash and Savoury Scone ($38). The beef cheeks were so tender that they just melted in our mouths and the accompanying vegetables were perfectly cooked. My friend loved the dish although we both thought the savoury scone was a bit on the hard side when eaten on its own. We quickly remedied that by dipping the scone into the hearty, flavourful sauce and that improved things significantly. Overall, we were both impressed with how tasty and flavourful this dish was.

For dessert, we shared the Lavender and Lemon Poached Pear Galette with Valrhona Chocolate ($12). The perfectly poached pear sat on a layer of pastry cream atop the galette. The galette itself was crispy, light, and flaky while the Valrhona Chocolate sauce was rich and creamy. This was the perfect light dessert to end off our decadent meal.

I feel so lucky that I had the opportunity to experience this event. Overall, the dinner was fantastic and the service was top-notch. I was really impressed at how organized and smooth things went at this “temporary” restaurant. Though the prices were a little high, I thought it was totally worth it as some of the dishes were truly outstanding and memorable. Comparatively, I’ve spent similar amounts for less impressive meals at other places around town. I’m glad to see Calgary embrace the concept of pop-up restaurants, which has become one of the latest trends in some of the major cities in North America and Europe. I’m really looking forward to see what’s in store at CHARPOP’s next event and who the next guest chef will be that they will collaborate with.