When I was visiting Vancouver last November, I went back to Penang Delight Cafe again for lunch because I really enjoyed the Hainanese Chicken Rice Balls that I had tried during my previous visit back in October. There are actually very few places I know of that serve their Hainanese Chicken with the chicken broth rice balls. 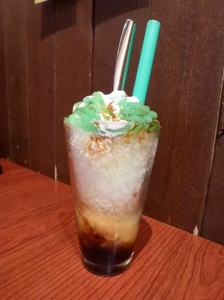 I saw that they had Cendol ($4.95) on the beverage menu and I was curious to try it. Cendol is a traditional Malaysian beverage. I had tried it for the first time at Seri Malaysia during one of the Chowdowns earlier last year. This version at Penang Delight Cafe contains shaved ice along with pandan jelly, coconut milk, palm sugar, sweet corn, and red beans. Personally, I preferred the version that I had at Seri Malaysia more mainly because I’m not a big fan of corn or red beans in my beverage. Also, I found there was a little too much shaved ice which made it quite difficult to stir. I also wished that there would be more coconut milk in this cendol.

For our lunch items, my friend C wanted to try the Curry Laksa ($7.95). She had a choice of beef, chicken, fish ball,  or mixed vegetables for the laksa. She chose chicken. The laksa consisted of boneless poached chicken pieces on top of yellow noodles and rice vermicelli along with bean sprouts, fried tofu, and half a hard-boiled egg in coconut curry broth. Overall, I thought this laksa was tasty. Both the noodles and the rice vermicelli were toothsome. The chicken pieces were tender and the curry broth flavourful.  However, comparatively, though I didn’t think the curry broth was a complex as the version from Bo Laksa King, I probably would order it again on my next visit if I were craving laksa.

Of course, I ordered the Hainanese Chicken Rice Ball ($8.95) again on this visit. Interestingly, I found the rice balls to be slightly different on this visit. They were slightly smaller than what I had remembered from my previous visit and they also were more sticky and gooey. Also, I found the rice grains on this occasion were broken whereas during my previous visit, the rice grains were firmer and more distinct. Personally, I prefer that version that I had during my previous visit more than the ones from this visit. Thankfully, the Hainanese Chicken itself was just as good as before. The chicken was steamed perfectly. The meat was silky, tender and flavourful. And I enjoyed the crunchy blanched sprouts along with the flavourful sweet soy sauce. Though I was disappointed with the rice balls, at least I thoroughly enjoyed the chicken pieces. 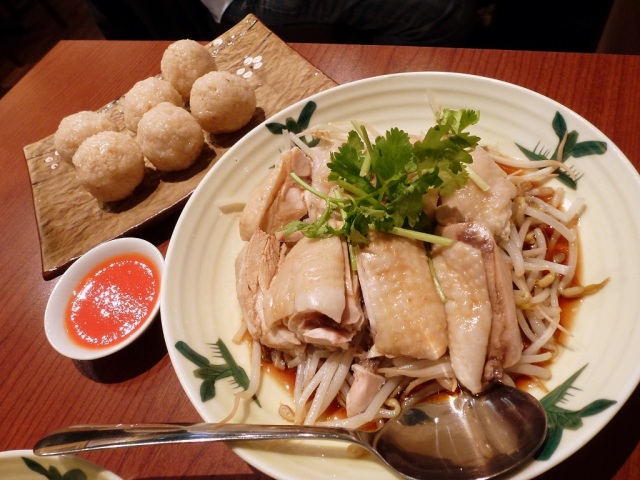 I had wanted to try the Kuih Dadar ($4.95), which is a rolled crepe flavored with pandan juice and filled with grated coconut steeped in Malaysian palm sugar (gula melaka). Since we were already full from our main dishes, I got the Kuih Dadar to go. It came with a side of palm sugar which I drizzled over the crepes. For those who are not fond of grated coconut, this dessert is definitely not for you as the grated coconut, which has been steeped in palm sugar, is the main component of the dessert. For me, I would say I’m indifferent towards this dessert as I don’t mind the grated coconut but I didn’t really love the dessert either. I’m glad I finally got to try it as I had always seen pictures of it and had wondered what it tasted like. 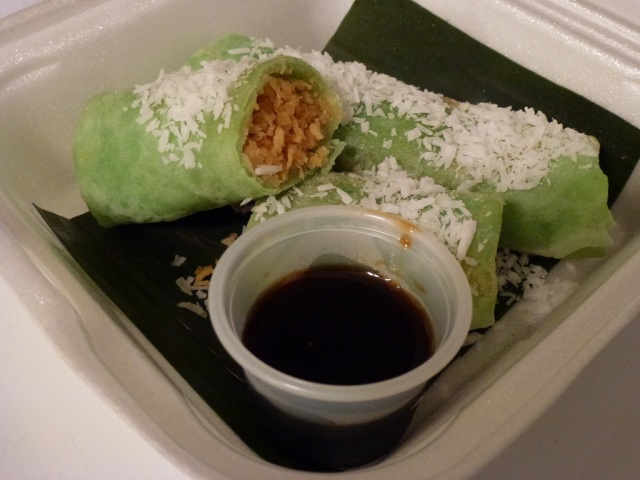