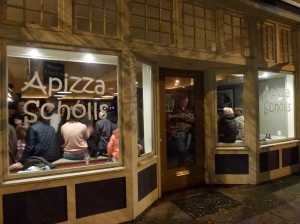 Apizza Scholls has become one of my favourite places for pizza ever since I tried it for the first time two years ago. Now Apizza Scholls is on the list of places I visit every time I’m in Portland, Oregon. Unfortunately, I’m not the only one that loves the pies here. It is hugely popular and there is always a wait-list, especially on weekends. On my recent visit to Portland back in November, my friend C and I went to Apizza Scholls again and this time the wait was 1.5 hours. We were starving so we put our name down and then decided to head to Pok Pok, which is only about a mile away from Apizza Scholls, to get a take-out order of the infamous Vietnamese Fish Sauce Chicken Wings as a snack to hold us over while we waited. By the time we got back, an hour had passed and we only waited a little while longer before our table was ready.

The pies at Apizza Scholls are best described as Neo-Neapolitan, which is a style that originates from the northeast region of the United States from Connecticut through to New Jersey. Hence, some might even refer to these pies as being New York-style, Connecticut-style, or even Neapolitan-American as the pies have some characteristics similar to classic Neapolitan pies but yet some other aspects have been Americanized.  They are not true Neapolitan since the pies are baked at 700°F in a conventional electrically heated Bakers Pride oven instead of a traditional wood-fire oven and the center of these pies are not as thin and soft as the authentic Neapolitan versions.

Since on this visit, it was just my friend C and I, we could only order one pie as all the pies at Apizza Scholls are 18″ and that is a lot of pie for two people.  Fortunately, Apizza Scholls will do Half & Half pizzas. We ordered our favourite combination, Half Tartufo Bianco & Half Apizza Margherita ($22). The Tartufo Bianco was a “white” pie that was topped with mozzarella (both whole milk & fresh), pecorino romano/grana padano along with truffle oil and sea salt while the Apizza Margherita consisted of tomato sauce, mozzarella (both whole milk & fresh), pecorino romano/grana padano, fresh garlic, extra virgin olive oil and fresh basil. The pie tasted just as good as we remembered. We both love alternating between the two so that we could enjoy the contrasting flavours – the creaminess from the Tartufo Bianco against the bright, tangy flavours of the Margherita. Our pizza had plenty of char both on the top and the bottom while the edges had nice blisters. The crust had a crispy exterior while the center was tender and had the perfect amount of chewiness. 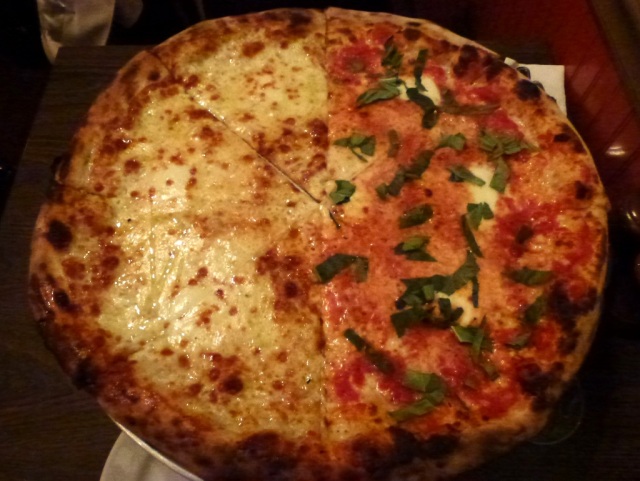 During my previous visit to Apizza Scholls earlier last year, we had two other dining companions so with the four of us, we ordered two pies. We tried the Bacon Bianca ($23) and a Half Apizza Amore & Half Tre Colori ($25). The Bacon Bianca consisted of whole milk mozzarella, pecorino romano/grana padano, lots of fresh garlic, herbs, black pepper, extra virgin olive oil and house cured bacon. The Apizza Amore was similar to the Apizza Margherita, which is topped with tomato sauce, mozzarella (both whole milk & fresh), pecorino romano/grana padano, fresh garlic, extra virgin olive oil and fresh basil, except with the addition of spicy capicollo. The Tre Colori consisted of mozzarella (both whole milk & fresh), pecorino romano/grana padano, semi-dried tomato & walnut pesto, ricotta and sliced jalapeños.  It’s a matter of personal taste but the Tre Colori was my least favourite out of the three. I found the flavours in this pie to be too busy and complex. When it comes to pizza, I’m a minimalist and I like clean, crisp flavours with fresh, quality ingredients that speak for themselves. I enjoyed the Bacon Bianca but I still preferred the Tartufo Bianco a bit more as I found the Tartufo to be bolder and more decadent. As much as I love spicy food, I found the spicy capicollo on the Apizza Amore to be a bit overwhelming and I actually prefer cleaner taste of the plain Apizza Margherita.

And on our first ever visit to Apizza Scholls, we had another friend with us so we were able to try the Caesar Salad ($9), which was made with whole romaine heart leaves, parmigiano-reggiano, house made croutons, tossed in Apizza’s house made Caesar dressing, and topped with anchovies. For our pizza, we had ordered the Half Tartufo Bianco & Half Apizza Margherita ($22). This was the perfect amount of food for the three of us. It was actually on this visit that we fell in love with the Tartufo Bianco & Apizza Margherita combination. I loved the Caesar Salad as well, especially the made-from-scratch Caesar dressing and the salty anchovies. We would have ordered the Caesar Salad again on our recent visit except that our bellies were already partially-full from the Pok Pok wings. It was probably a bad idea on our part to snack on the wings but we were so hungry we couldn’t wait 1.5 hours without a snack.

Apizza Scholls is definitely one of my all-time favourite places for pizza. I actually prefer their style of pizza over the authentic Neapolitan style as I enjoy the crispiness and chewiness of the crust. I wish there would be more places that serve this style of pie. My only quibble is that I wish they would offer different sizes of pies. At 18″, it definitely too much for one person and barely manageable by two people. If you do plan to try out Apizza Scholls, my advice would be to go early and go with a hungry belly.

2 Responses to Apizza Scholls – Portland, OR