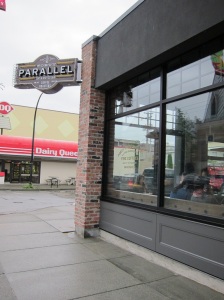 I was fortunate enough to catch the opening of Lucky’s Doughnuts while I was in Vancouver a couple of weeks ago. The highly anticipated Lucky’s Doughnuts is the second gourmet doughnut shop to open up in Vancouver this year. The first, Cartems Donuterie, had opened up a pop-up shop in Gastown back in February. When I was visiting Vancouver back in March I had the opportunity to sample a bunch of the donuts from Cartems.  When I saw the tweet that Lucky’s Doughnuts had finally opened, I made my way down the very next day to check it out.

Lucky’s Doughnuts is located inside the second location of 49th Parallel Cafe at the corner of the Main Street and East 13th. 49th Parallel is a renown coffee roaster in the Vancouver area owned and operated by brothers, Michael and Vincent Piccolo, who were the creators and former owners of the Caffe Artigiano chain. In addition to their main business of sourcing the world’s finest coffee beans and custom roasting them in-house, 49th Parallel also has two cafes, one located on West 4th and now this one on Main Street. Despite my frequent trips to Vancouver, I’m embarrassed to admit that I’d not visited a 49th Parallel cafe location until now. The moment I stepped foot into this Main Street location, I took an immediate liking to the rustic decor and was surprised at how spacious this cafe was.  I decided to get a Caffe Americano to go with my sweet treats. 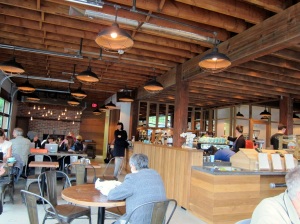 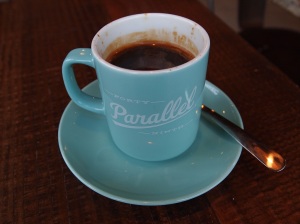 In the back corner of the cafe is a glass room which is the home to Lucky’s Doughnuts. I even managed to catch a glimpse of Dawne Gourley, the mastermind behind Lucky’s yummy doughnuts, in action. All the doughnuts are made on site so they are as fresh as can be. 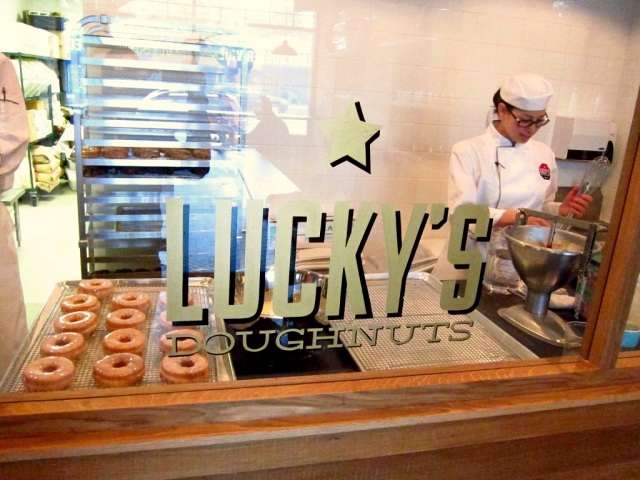 The first of my doughnut sampling was the Apple Bacon Fritter ($3.50). I liked the toothsome apple chunks contrasted with the savoury bits of bacon. This definitely was one of the better fritters I’ve had in a long time and I wouldn’t hesitate to get it again on my next visit.

Next up was Salted Caramel Old Fashioned Doughnut ($3). This was probably my least favourite out of the lot that I sampled. I found the glaze to be too sticky and sweet because of the caramel and I couldn’t detect any saltiness at all. 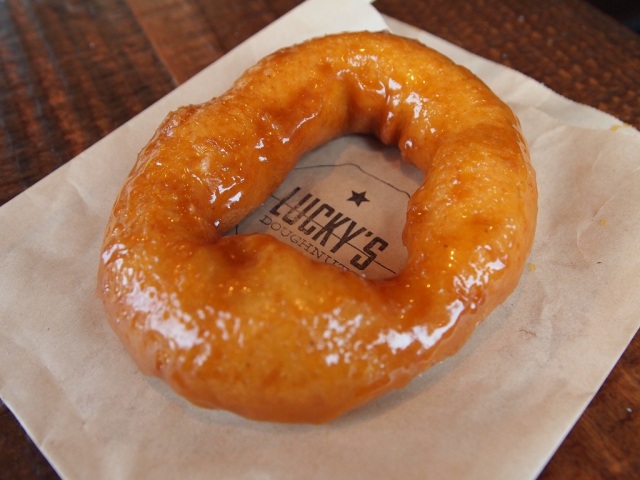 The third doughnut I sampled was the Lemon Bismark ($3). This doughnut was filled with tangy lemon curd. Upon initial glance, this doughnut actually reminded me a lot of the famous Sugar Bun that I had tried a couple of months ago from Giovane Cafe & Winebar. As I later learnt, this isn’t really surprising because Dawne Gourley was formerly the manager and pastry chef at Giovane’s. Comparatively though, I much prefer the Lemon Bismark over the Sugar Bun as I really enjoyed the bright and tangy flavours of the lemon curd filling. Compared to the lot of Lucky’s doughnuts that I tried, this was my second favourite.

As I was sitting down to sample the first couple of doughnuts, out of the corner of my eye, I spotted the display case was being replenished with new batches of freshly made doughnuts. I excitedly went up to check out what new varieties were available. The first was the Orange Pistachio Honey Cake Doughnut ($3). When it was still fresh, this doughnut was actually pretty tasty as it was warm and soft. However, once it cooled down, it tasted just ok later on when I nibbled on it a couple of hours later. It didn’t taste nearly as good as when it was fresh. Perhaps, one might argue that the same could be said of all the other varieties since doughnuts are best consumed fresh. However, since I did actually nibble on the others as well a couple of hours later, I found my opinion changed the most on this one. I didn’t mind the Orange Pistachio Honey when it was fresh but once it cooled down, I didn’t really care for it. 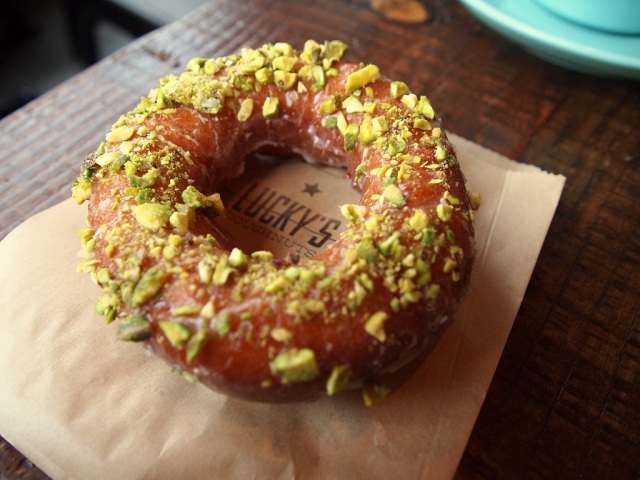 Since I love all things mango, when I saw that they had the Mango Square ($3.50), I couldn’t help but to get it. Upon first glance, I wasn’t sure what to expect as the glaze didn’t seem very mango-ey. After the first bite, I realized that there was mango filling all the way around the square. I thought this was an ingenious way for them to fill it so that you would get some mango filling in every bite. I really loved the filling as it had a really strong mango taste. The mango flavour tasted real and did not have any hint of artificial flavouring at all. I also liked that the mango filling was tangy and not overly sweet. To me, out of all the doughnuts I had sampled on this visit, this Mango Square was the winner! And I would actually go so far as to say that this is one of the best doughnuts that I’ve ever had.

It’s all a matter of personal preference but for me, Lucky’s Doughnuts has without question become my new favourite gourmet doughnut shop in Vancouver. My top two favourites thus far are the Mango Square and the Lemon Bismark. It’s too bad that not all the varieties are available at any given time so I never know what I might be able to get on my next visit. I’m hoping to be able to try more varieties of their filled doughnuts such as the Coconut Bismark with meringue topping.