When I met up with my food blogger friend, Anna of Anna’s Appetite, for brunch a couple of weeks ago, she mentioned that there was a new stall that had just opened up at the Calgary Farmer’s Market focusing on macarons. I was curious so we decided to head there to check it out after having brunch. As it turns out, this new stall was Little Yum and it is the little sister to Yum Bakery, which is also located at the Calgary Farmer’s Market.

While the Yum Bakery stall sells a variety of pastries and desserts, Little Yum mainly focuses on mini cupcakes and macarons. There were macarons of all different colors and flavours. This was certainly an impressive display of macarons as there were 30 different varieties. The macarons sold for $1.75 each, $10.50 for a half dozen, or $21 for a dozen. 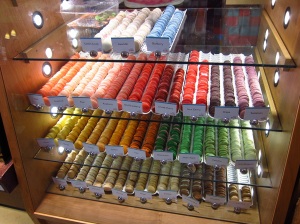 I decided to get a six-pack of macarons so that I could try the following flavours:

Overall, I have to admit that I was slightly disappointed with the quality of these macarons. Though the flavours were great for most of the them, 3 out of the 6 macarons that I sampled had textural problems. I had high hopes and was really looking forward to the great flavour selection that they have. I’ll probably wait a while before going back to try them again. Hopefully by then, they will have ironed out these quality issues.