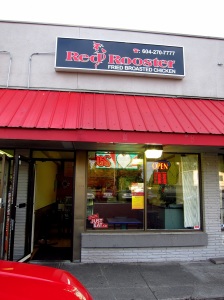 After having it on my “to try” list for so long, I finally managed to try broasted chicken for the first time while visiting Vancouver last month. I’d first learnt about Red Rooster’s broasted chicken from the post on the blog “are you gonna eat that?“ earlier this year. Since I’m a fiend for fried chicken, I was immediately intrigued by the “broasting” technique.  Broasting is a trademarked technique for cooking chicken and other foods using a pressure fryer. This technique basically combines pressure cooking with deep-frying and is supposed to make the chicken more moist and juicy on the inside and crispy on the outside. At the same time, chicken prepared by this pressure-frying method is supposed to be less greasy than traditional fried chicken. The chicken is marinated for hours and then cooked using special broasting equipment (broaster) that can only be purchased by food service companies and is not available to the home cook.

There are a handful of places in Canada that offer broasted chicken but Red Rooster is the only one I know of in the Vancouver area. Red Rooster is located in the strip mall across from L.A. Chicken, just off No. 5 Road in Richmond. Besides the broasting technique, Red Rooster is also unique because their food is halal, which means the food has been handled according to strict Islamic dietary laws. 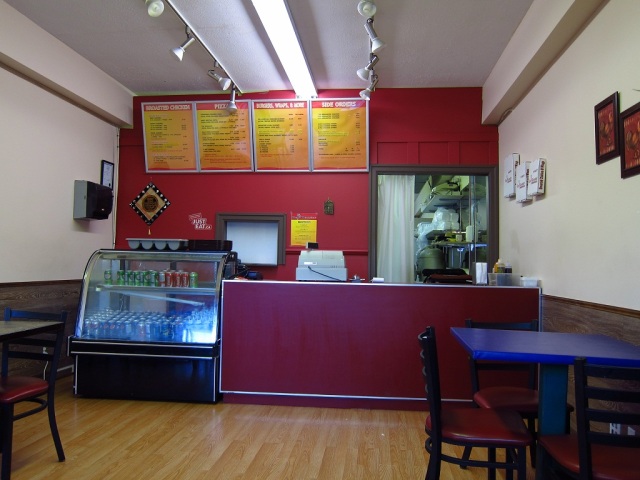 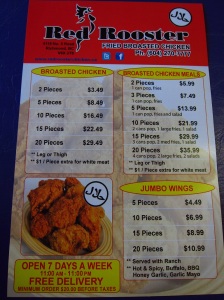 My friend C and I decided to share a 5-piece order of the Broasted Chicken ($8.49). The chicken was indeed  moist and juicy on the inside while being crispy on the outside. It was well-seasoned and flavourful. The best part was that it wasn’t greasy at all.  This style of fried chicken is very different from the southern-style fried chicken that I love from Popeye’s Chicken & Biscuits in the US as the broasted chicken is only lightly battered. My only wish is that Red Rooster would make a spicy version of the broasted chicken as I’m crazy for spicy fried chicken. 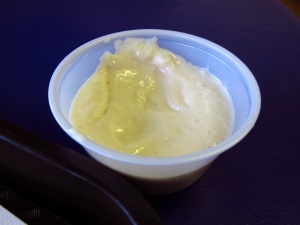 We were also given a side of garlic dipping sauce to go with our chicken. It was delicious and went perfectly with the broasted chicken. My friend C and I just couldn’t get enough of the dipping sauce as we both love garlic.

Another thing that I liked about Red Rooster is that the broasted chicken is made to order unlike most other fried chicken places. It took about 20 minutes for our order to be ready. We certainly didn’t mind waiting as we prefer freshly prepared chicken rather than ones that have been sitting under a heat lamp. Overall, I was really impressed with the broasted chicken from Red Rooster and I’d definitely be back for more on my next trip to Vancouver. And I wish someone would open a broasted chicken shop in Calgary.