I finally made it down to try Oscar’s Restaurant with my friend a couple of months ago. Oscar’s is the sister restaurant to Wellington’s of Calgary and they both share the same kitchen since they are located side by side. I’d been to Wellington’s once a couple of years back and was really impressed with both the food and the service. Wellington’s is best known for old school fine dining whereas Oscar’s is the casual dining sibling.  The menu at Oscar’s is the same as the lounge menu at Wellington’s. Both Oscar’s and Wellington’s have been around for several decades and families have being going there for generations. I’d come across several comments about the average age of their customers being older than anticipated. With this in mind, I wasn’t sure what to expect when I first arrived at Oscar’s. I was pleasantly surprised to see that the dining area had been renovated and was actually quite contemporary. But it was indeed true that the average age of their customers were older than what I’m normally accustomed to at the places I typically go to with my friends. In fact, I noticed that my friend and I were the youngest patrons there. There were other people at Oscar’s that were younger than us but they were all with their parents and/or grandparents. In all honesty, the age thing did not bother me one bit. I’m mentioning it in case someone thinks this is a hip and trendy place to take their friends.  Personally, I’m actually sick and tired of the hip and trendy casual dining places that serve mediocre food. My sole purpose for going to Oscar’s was for their food. I had high hopes since I had read some great reviews about Oscar’s.

I decided to try the classic Steak Sandwich ($21), which came with a starter size Caesar Salad. The starter size Caesar salad was HUGE. At most places, this would be consider a meal-sized salad. The house made Caesar dressing was amazing! This was easily the best Caesar salad that I’ve had in a long time. I wish more places would make their Caesar salad dressing from scratch like Oscar’s does. The crunchy croutons added the perfect textural contrast to the crisp greens. I would definitely give this salad top marks.

The steak sandwich consisted of an 8 oz Sterling Silver Rib Eye atop a piece of garlic toast and was served with a stuffed potato. The toppings for the stuffed potato were served tableside like at the classic steak houses. I was happy that they didn’t skimp and had real bacon bits. The steak itself was cooked perfectly to order and was well-seasoned and flavourful. This was definitely one of the better steak sandwiches that I’ve had. 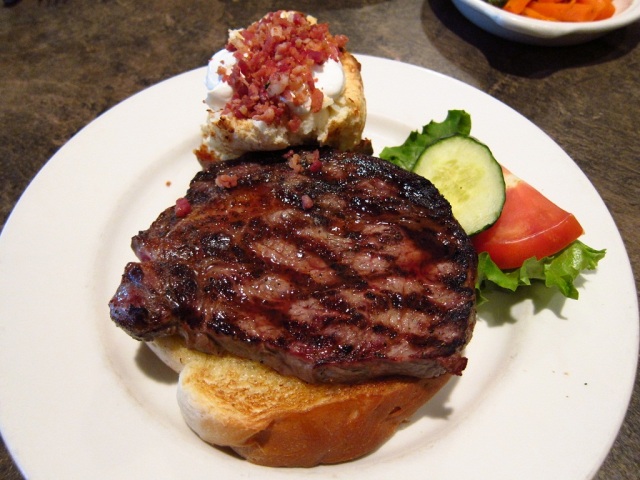 My friend M ordered the Pepper Steak ($17.50), which consisted of tenderloin chunks sauteed with peppers, onions, tomato, mushrooms in a rich red wine sauce and was served with a side of rice. Though the tenderloin chunks were tender and the sauce was flavourful, this dish wasn’t really my style even though it was well-executed. 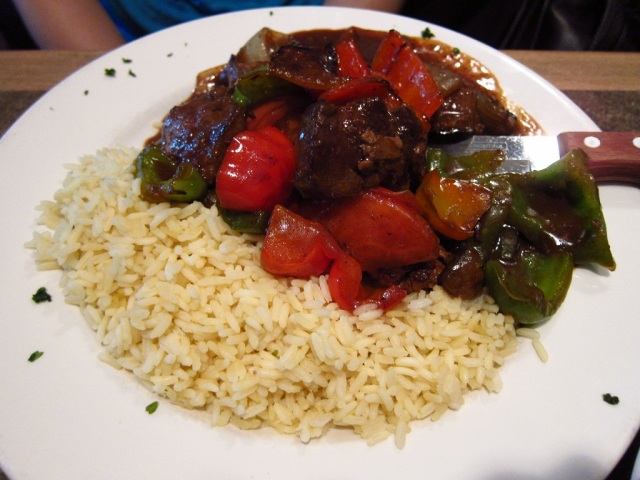 My friend also ordered a side of Fresh Vegetables ($5), which consisted of green beans and carrots. Both were cooked perfectly. My friend loved the green beans while I really enjoyed the carrots, which had a bit of dill sprinkled on top.

I had loved the Caesar Salad so much that I couldn’t stop thinking about it. When some friends were visiting from out of town a couple of weeks later, I decided to take them to Oscar’s to show them my latest find. Based on my recommendation, one of my friends ordered the Caesar Salad with Broiled Chicken ($13.50). My friend really loved the salad. I had a taste of the chicken and was quite impressed with how flavourful and juicy it was.

My other dining companion ordered the Caesar Salad with Blackened Chicken ($13.50). Though I usually love really spicy food, when I tasted the blackened chicken, I was actually surprised at how spicy it was. It wasn’t beyond what I could handle. But to my surprise, I actually prefer the broiled version with milder seasoning than the blackened version as I found I could better taste all the other flavours of the salad with the milder seasoning in the chicken.

I had a hard time deciding and ended up settling on the Oscar’s Burger ($11.00). I’d been curious about the burgers at Oscar’s as I had read some great reviews about them. Oscar’s actually offers several variations of the burger such as the cheddar burger, the bacon and cheddar burger, and the mushroom, bacon, cheddar burger. I decided on the plain burger because I had already consumed a lot of extra calories that day. The burgers and sandwiches at Oscar’s come with a choice of fries or salad. It was a no brainer that I wanted their Caesar Salad. The salad was as good as I remembered it to be on my first visit. The burger, on the other hand, was a bit dry for my liking. The half pound patty was finished with a house special sauce and came with lettuce, tomato, and pickles. Perhaps, it was my fault for ordering the burger plain without the extra toppings as I’m sure the fats in the toppings would have provided more moisture to the patty. Overall, the burger itself was just ok. It was no where nearly as good as the burger that I had at Naina’s Kitchen. I’m willing to give the burger at Oscar’s another shot in the future, but with some extra toppings to see if it’s better. In the meantime, if I were ever craving Caesar Salad, Oscar’s would definitely be my go to place.

This entry was posted in Alberta, American, Calgary, Dinner, eat and tagged Calgary:. Bookmark the permalink.