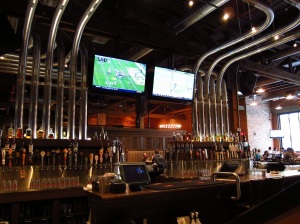 I just haven’t had very much luck with brunch in Calgary lately. First, it was the disappointing brunch at A Ladybug Bakery and Cafe a couple of months back. Then it was a frustrating brunch experience at Vendome Cafe a couple of weeks later. Since then, I’ve been on the lookout for various places around town to try for brunch. Back in early December, my friend M and I decided to check out Craft Beer Market for brunch one snowy Sunday since neither of us had tried it before.  In my mind, Craft Beer Market kind of reminds me of Wurst Restaurant & Beer Hall since the concept of both places are quite similar. Since I loved my brunch experiences at Wurst, I was hoping to have the same luck at Craft Beer Market.

Craft Beer Market is located in the space that used to be home to Mother Tuckers for decades. I was quite impressed at how they had transformed the former dated decor into a contemporary casual atmosphere.

Since I love the French Toast at Wurst, I was curious how the version from Craft would compare. Hence, I ordered Craft’s signature French Toast ($13), which came with a choice of mixed berry & mascarpone or banana & chocolate. I decided to choose the mixed berry & mascarpone version. When the dish arrived I was actually quite surprised that the mixed berry was actually incorporated into the mascarpone, similar to a mixed berry cream cheese consistency. Since the menu was rather vague about the preparation, I had assumed there would fresh mixed berries scattered on top of the French toast. Even with the berries mixed into the mascarpone, I had hopes that this dish would still have potential. I was also surprised at the large portion. My order of French Toast consisted of four slices of thick-cut Texas toast with a generous layer of the mixed berry mascarpone stuffed in between the slices. The French Toast was served with slightly melted whipped cream and a jar of maple syrup on the side. Even though this French Toast sounded really gourmet on paper, it tasted just ok. For me, it’s about quality, not quantity and I found the  portion to be too much and the taste wasn’t impressive at all. I found the mixed berry flavour to be quite weak and not really noticeable in the mascarpone mixture. When it comes to French Toast, the version from Wurst is still #1 in my books. I just can’t get enough of their gourmet French Toast, which is stuffed with slices of double smoked bacon & shredded Sylvan Star gouda and is then topped with a crunchy apple slaw, whipped crème fraîche and a blueberry sauce along with some fresh berries.

My friend M ordered the Spolumbos Chicken Sausage Skillet ($14), which came with eggs, roasted peppers, cilantro and potato chunks along with a side of toast. Since my friend was on a gluten-free diet, she has asked for the toast to be substituted with gluten-free bread, which ended up being a toasted gluten-free hamburger bun. Again, Craft seems to focus more on quantity here more than quality. There was nothing really wrong with the skillet per se, but it wasn’t exactly memorable or gourmet either. 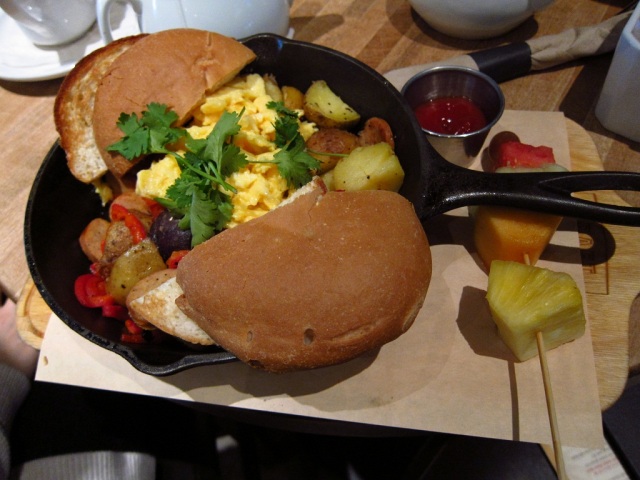 Overall, our brunch experience at Craft was just ok. There was nothing really memorable about the dishes that we tried. The service was adequate though our server wasn’t particularly familiar with all the details of the menu items. Craft is a decent place to go for brunch if you want large portions and no line ups to deal with. However, I wouldn’t say this is a place to impress your foodie friends.

This entry was posted in Alberta, American, Breakfast/Brunch, Calgary, eat and tagged Calgary:. Bookmark the permalink.