It was a busy week of eating for me last week. First, it was the family-style set menu dinner at CHARCUT Roast House for The Big Taste event. Then the following evening, my foodie friend and fellow food blogger, Anna of Anna’s Appetite, and I decided to check out downtownfood for their The Big Taste $35 set menu dinner. Anna had previously been to downtownfood and was impressed with quite a few of their dishes so I was really excited to check it out. downtownfood is the brainchild of Chef Darren MacLean and his menu focuses on local, sustainable farm fresh cuisine with Asian and French influences. Everything on the menu is made from scratch in-house. 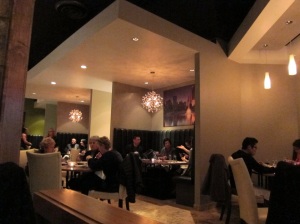 While waiting for our food, we snacked on slices of house baked baguette. The bread was delicious. Both Anna and I couldn’t get enough of it. I had to try hard to control myself so that I wouldn’t get too full on the bread alone before the food even arrived.

As part of The Big Taste $35 set menu, we started off with an appetizer of Beet Tartare, which consisted of roasted yellow, pink and red spiced beets along with capers, shallots, pickles, garlic aioli, mustard and was served with tangy cumin crisps. This was a really interesting dish and the combination of flavours and textures really worked well together. I really liked the cumin crisps which were light and almost paper-thin.

Next we were surprised with a couple of complimentary treats from Chef Darren and his team. The first was the Fung Style Sashimi, which consisted of slices of konbu cured kampachi with horseradish and edamame puree and was topped with tobiko, diced scallions, and furikake. The sashimi was like no other that I had before. This wasn’t just a couple of slices of fish served with wasabi like you would normally get at a Japanese restaurant. The flavours of this konbu cured kampachi were really delicate and subtle. All the flavours had reminiscences of Japanese cuisine but was much more sophisticated when combined together.

The second dish was the Ceviche of Scallop, Mussel, Shrimp and Albacore Tuna.
It was served with a refreshing aji amarillo, coconut and lime sauce along with spicy popcorn and finished with cilantro and paprika oils. I was really excited to try this dish as my friend Anna had been raving about it after her previous visit. Indeed, this dish was really impressive. The aji amarillo, coconut and lime sauce had the perfect amount of acidity. All the flavours and textures together played their role in making this dish sublime.

At this point, both Anna and I were already blown away by the flavours and the presentation of the two dishes we had just finished. As if they hadn’t impressed us enough already, our server then stops by to deliver a truffle serving set containing the slicer along with two truffles. At this point, both Anna and I were ecstatic and eager with anticipation of what was to come. We were both really curious as to what was going to be served with the truffles. Our server then arrived with a bowl of each of us. Inside the decorative bowl was a handmade slow braised beef and truffle ravioli topped with a foamy miso and foie gras broth and garnished with a pansy flower. 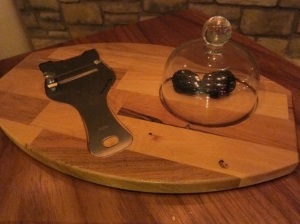 The glass dome was then lifted with the smell of the truffles wafting through the air. Our server then gingerly shaved slices of truffle into each of our bowls. This was my first time experiencing table-side truffle service.

This Slow Braised Beef Ravioli in the miso, foie gras broth and topped with fresh shaved truffle was simply AMAZING. I don’t think words could adequately describe how good this dish tasted. This dish had my favourite luxury foods – foie gras and truffle, all combined in one and they came together in perfect harmony. Even on its own, I loved the miso, foie gras broth. It’s too bad we didn’t have a spoon and were out of bread at that point because I really wanted to drink the remaining broth. If it wasn’t such as a faux pas, I would have drunk it straight out of the bowl and made sure every drop didn’t go to waste. But alas, I will have to wait for my next visit to downtownfood to have more. This is definitely a must order dish at downtownfood if you love foie gras and truffles.  I already know this dish will be one of my top bites of 2013. 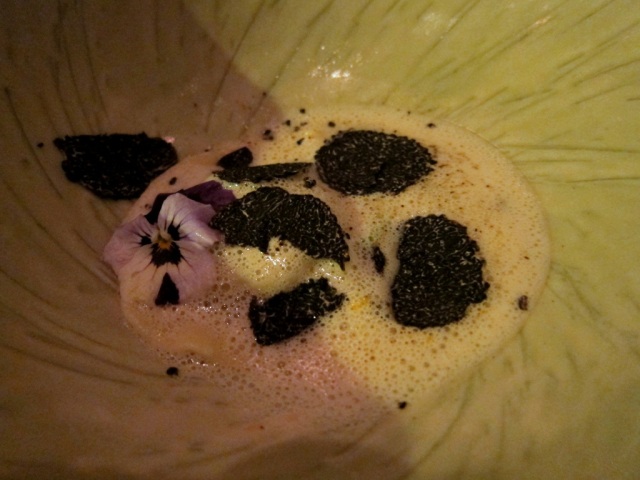 As part of The Big Taste set menu, we had a choice of either the Crispy Duck Leg Linely Style or the Broek Acres Pork Trio for our main. Both Anna and I chose the Broek Acres Pork Trio. It was a no brainer decision for us since she had raved about this dish so much from her previous visit. The Broek Acres Pork Trio consisted of pork belly confit, 48 hr brined and sous vide pork loin, crispy pork rinds, kohlrabi puree, shmeji mushrooms, and asian BBQ sauce. Initially, this dish was supposed to have braise pork shank but they were out so they substituted with the pork belly confit. I think I lucked out with the pork belly confit as it makes the dish that much more decadent. This dish is a totally pork lovers dream! The pork belly confit tasted amazing!  I was also impressed with how moist and flavourful the slices of pork loin were. And of course, I loved the crispy seasoned pork rind.  We could still hear it crackling as the dish was served at our table. I could eat a whole dish of the crispy seasoned pork rinds alone if it was available. This dish really had the wow factor. It has actually been many years since I’ve been impressed with a pork entrée and this one really did it for me. And I’m not kidding! The last time I had a memorable pork entrée was the Double-cut Pork Chop at the now-defunct Feenie’s in Vancouver back in 2006 when Rob Feenie was still at the helm. This Pork Trio was a really well-composed dish. All the flavours and textures really worked well together. This is a dish I’m definitely ordering again on my next visit to downtownfood.

For dessert, as part of The Big Taste menu, we had a choice of the Lemon Tart or the Triple Chocolate Mousse. We decided to get one of each so that we would have an opportunity to sample both. The Lemon Tart in a shortcrust pastry was very unique in texture and like no other lemon tart that I’ve had before. This is actually one of the signature desserts at downtownfood. What makes it unique is that the filling was actually a lemon creme brulee. Chef Darren told us that the shortcrust pastry is first blind baked and then filled with the liquidy lemon custard and baked some more, much like how one would make creme brulee. The Lemon Tart was perfect. It was not too sweet and not too tart. It paired beautifully with the cassis sorbetto that was made by Fiasco Gelato using Chef Darren’s recipe.

Next was the Triple Chocolate Mousse. Let me tell you, this is no ordinary chocolate mousse. We didn’t know what to expect initially when we ordered it but were pleasantly surprised with the toppings that it came with. The toppings really made the dessert. Instead of being an ordinary creamy mousse, the toppings gave the dessert a whole different dimension. There were crumbled bits of dark chocolate cookie similar in taste to a Oreo cookie, salty peanuts, and a crunchy candy brittle that reminded me of crispy peanut flake center of a Cadbury Crispy Crunch bar. All this was mixed together on top of layers of white, milk, and dark chocolate mousse. Every bite was a surprise. And I found myself wanting more after each bite as I was curious what would be in the next one. This was definitely one of the most memorable chocolate mousse that I’ve had. 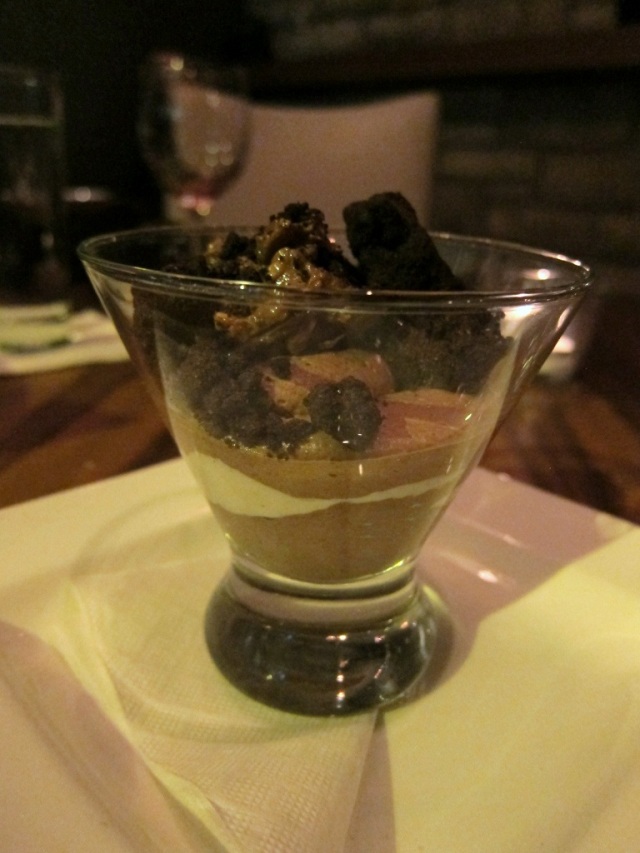 I must say that I’m thoroughly impressed with the food prepared by Chef Darren and his team. All the dishes that we had were very well executed and the flavours spot on.  Though it’s hard for me to pick, the ones that really wowed me the most was the Slow Braised Beef Ravioli and the Broek Acres Pork Trio as well as the Triple Chocolate Mousse for dessert. There isn’t a dish that we had tasted that night I wouldn’t order again. With this meal, I must say downtownfood has really changed my view of Calgary’s culinary scene and also, my feelings towards “Dining Week” events such as The Big Taste. Even with a full restaurant that night and most tables choosing to sample the featured The Big Taste set menus, all the dishes were prepared with much care and attention to detail and the taste and flavours were just outstanding. Chef Darren and his team were definitely there to showcase the best that they can do and not there to just churn out volume.  I haven’t experienced this caliber of food in Calgary before. On occasion, I’ve tasted an odd dish here and there that’s been really tasty but I haven’t experienced a meal here in Calgary where I’ve been impressed with pretty much every course that was served like I was that evening.  With most of the restaurants that I’ve been to in Calgary, fine dining ones included, the food is usually executed well (i.e. cooked correctly) but the flavours never really impress me like those dishes did that night. Without a doubt, I’d definitely be back to downtownfood again. It’s going to be hard for me to sample other dishes on the menu because I’ve already found so many that I love and want to have again and again.