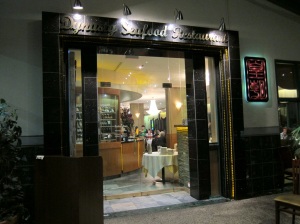 Three weeks ago, two of my foodie friends and I went to Vancouver for the weekend. Since we happen to be there during Alaskan King Crab season and my friends had never tried king crab prepared Chinese style before, it was at the top of our must try list.  I’ve only ever had fresh Alaskan King Crab twice before, once at Excelsior Restaurant back in 2010 and then last year at Lucky Tao Chinese Seafood Restaurant. I wasn’t sure which Chinese restaurant to pick this year for this Alaskan King Crab feast since quite a few Chinese restaurants offer king crab when it is in season. Hence, I consulted with local foodie, fmed of Wise Monkeys, for a recommendation. He suggested Dynasty Seafood Restaurant on West Broadway. I’d previously been to Dynasty before on a trip to Vancouver last year. That time I was there for dim sum with a bunch of local hounds.

In order to ensure that our epic king crab feast would go smoothly, I actually called in advance to reserve the crab. We ended up with a king crab that was 10.25 pounds for the three of us and the market price that day was $26.99 a pound. This price included preparing the crab two ways. Like usual, the live crab was presented at the table for our inspection. 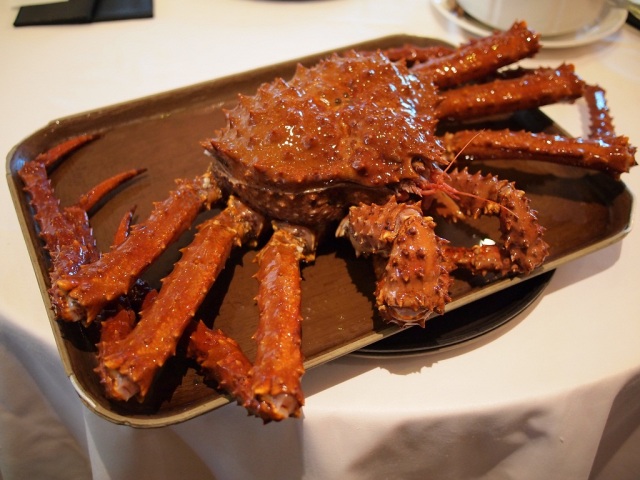 The first dish was the Steamed King Crab Legs with Minced Garlic. The crab meat was so succulent, tender, and sweet. My friends and I loved it!  This meal was so decadent to me because in the past, I’ve had to share a platter of this size with a table of ten diners but this time, this whole platter was just for the three of us. This was the most crab I’ve ever had in one sitting. 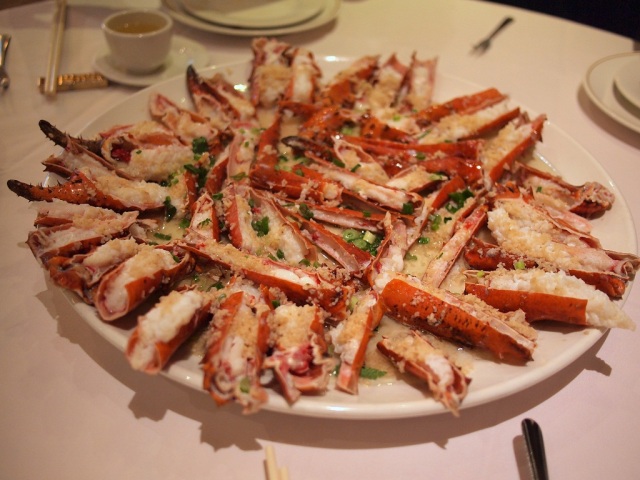 The second preparation was the Deep Fried Crab Knuckles with Garlic & XO Sauce. This preparation is often known as “Typhoon Shelter” style (or sometimes known as Aberdeen style), which is a preparation style that originated from Hong Kong and is usually a popular way for preparing crab. The “Typhoon Shelter” style or Aberdeen style is basically the term used to describe a chef’s secret chili concoction made from a blend of spices such as garlic, scallion, chilies, and XO sauce. Comparatively, though I still think the “Typhoon Shelter” style at Excelsior is tastier. I’m not sure why but perhaps, it’s because that was my first experience of fresh king crab and also my first experience of having it prepared this way so in my mind, it will always be the most memorable. This version at Dynasty was very well-executed and my friends loved it. I thought it tasted better than the version that I had at Lucky Tao last year. 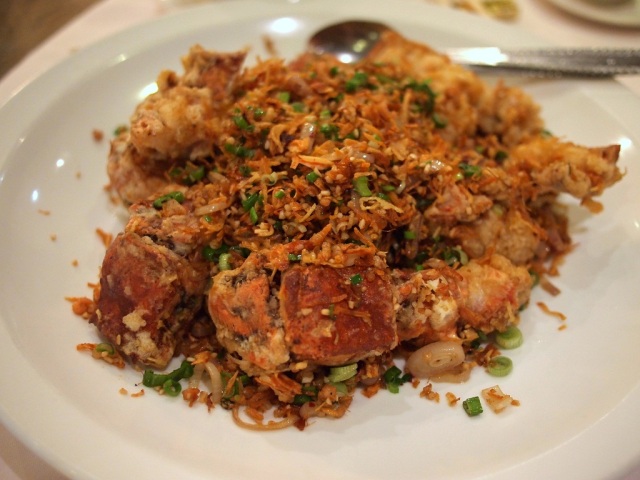 For our third dish, we asked for the leftover garlic juices from our first course (the steamed King Crab legs) to be tossed with thin chewy fresh egg noodles (additional $10). This was delicious but very filling. The noodles were perfectly al dente and so flavourful from the crab juices.

We also decided to get a vegetarian dish to balance out our meal.  Based on fmed’s recommendation, I suggested that we try the Sautéed Buddha Feast ($16.99) since it had won the 2012 Chinese Restaurant Awards Critics’ Choice Signature Dish Award in the Vegetable/Tofu category.  All the components were perfectly cooked as apparently each component is cooked separately to the proper cooking time and then sautéed together at the end so that components which require a shorter cooking time won’t get overcooked and mushy.  This dish consisted of vermicelli, wood ear fungus, abalone mushrooms, dried bean curd and cabbage.  All the components were really flavourful. My friends and I really enjoyed this dish. 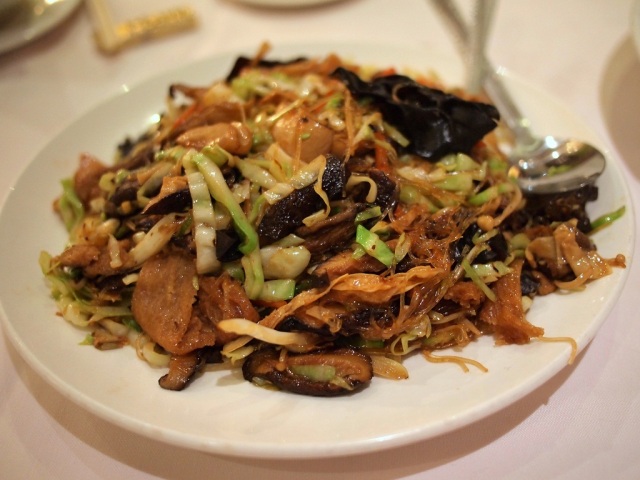 This was indeed an epic Alaskan King Crab feast.  I was really impressed that the three of us managed to polish off all of the crab. This was definitely the most king crab I’ve ever eaten. All the dishes were well-executed and the service was top-notch. Though this meal was a little on the pricey side, I thought it was totally worth splurging on. Thanks to fmed for the recommendation.  This was definitely a meal to remember.