Every now and then, my coworkers and I go to Happy Hill Restaurant for a dim sum lunch. Happy Hill is located just off Centre Street and 7th Avenue NE. My most recent visit was in late February. I was really looking forward to this lunch at Happy Hill after learning from my coworker that they too serve Pan Fried Turnip Cake with XO Sauce ($6.25). This is actually one of my favourite dishes at dim sum and I didn’t even know that we could get it in Calgary until a couple of months ago when I tried it at U&ME Restaurant. Previous to that, I’d only had it a handful of times at dim sum in Vancouver – a couple of times at Good Choice Restaurant, once at The Jade Restaurant, and a couple of times at Double Double. This is not a version that is always available at dim sum. Most commonly, the version available at dim sum is the large pan-fried slices of radish cake. Be careful when you order at Happy Hill as they also offer the pan-fried slices as well and it’s just called Pan Fried Turnip Cake on the dim sum list. Personally, I prefer this cubed version as it leaves for more surface area to be fried and become crispy. On this visit, the Pan Fried Turnip Cake with XO Sauce was just ok. It wasn’t as crispy as I would have preferred. My coworker mentioned that it is usually more crispy. Guess I’ll have to go back and try it again another time.

Our second dish was the Pork Dumplings with Massago ($3.95).  These dumplings were executed well. They were pretty standard and exactly what I had expected. I wouldn’t say they were outstanding but they weren’t bad either.

My coworkers like Beef Tripe with Ginger ($3.95).  This dish was executed well. The tripe was very flavour and tender. Though I don’t eat tripe often, I found this version to be pretty tasty and would order it again.

For our fourth dim sum item, we tried the Steamed Shanghai Style Pork Dumpling ($4.55). This dish is often known as soup dumplings, or xiao long bao (xlb). In all honesty, I usually never order this dish in Calgary because more likely than not, I will be disappointed.  I’ll admit that I’m picky when it comes to Shanghai soup dumplings as I’ve experienced some of the best examples of this dish while visiting Vancouver. Over the many visits to Vancouver, I’ve pretty much tried most of the restaurants that are famous for this dish including Long’s Noodle House and Lin Chinese Cuisine. I enjoy the versions where the the wrapper/skin was very thin but yet still has structural integrity so that the wrapper/skin doesn’t break with the soup leaking out when you pick it up. My biggest quibble with the versions that I’ve had here in Calgary is that the wrapper/skin is usually too thick and there is usually barely any soup in the dumpling. And my favourite part of the dumpling is usually the soup. This version from Happy Hill is no different. There wasn’t that much soup in the dumpling.

Since it was shortly after Chinese New Year’s when we went, my coworker ordered the Pan Fried Rice Cake ($3.95), which is usually most popular during Chinese New Year though it can be eaten all year round. I can’t say for sure whether this item is available year round at Happy Hill or just during the few weeks around Chinese New Year annually. This Rice Cake is often known Niángāo  (which literally translates as “year cake”) or Chinese New Year’s cake.  The Rice Cake is made with glutinous rice flour, wheat starch, salt, water, and sugar. The color of the sugar used determines the color of the pudding (white or brown). Keep in mind, this “cake” isn’t anywhere close in texture to what you might expect for cake by Western standards. It actually has a texture more similar to a very dense pudding when cold. When pan-fried and still warm, it is crispy on the outside while being chewy and gooey on the inside. Personally, because I don’t have much of a sweet tooth, I found this version to be a bit too sweet for my liking.

Last but not least, we ordered the Braised E-Fu Noodles with Enoki Mushrooms (~$9.95). This is my favourite dish at Happy Hill. Note that this is a special order item. You will not find this dish on Happy Hill’s menu nor will you find anything similar. The closest resemblance to this on their menu noodle-wise is their Special Mixed Meat Wor Yee Mein  or their Crab Meat Wor Yee Mein as both of those dishes contain Yee Mein, which is another name for E-Fu noodles, but both of those dishes are noodle soups and not stirfried like this. My coworker has had this dish at other restaurants and specially requested them to make it this way.  On earlier visits, we’ve had some trouble ordering this dish as they didn’t seem to understand what we wanted but we’ve been back often enough that we are able to order this dish without much explanation now. 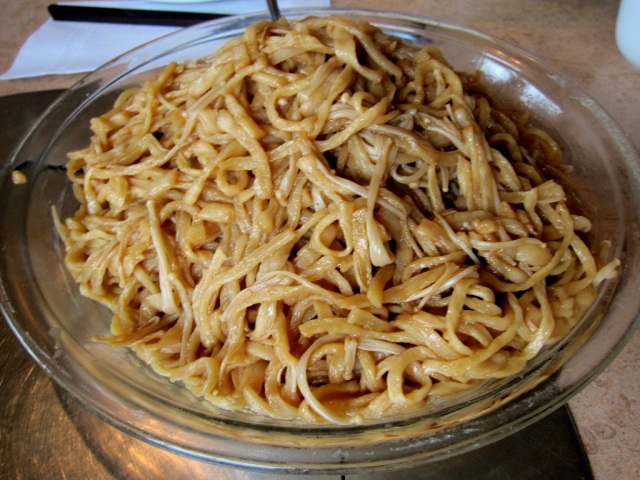 Overall, the dim sum at Happy Hill was decent. I enjoyed the Pan Fried Turnip Cake with XO though I’d prefer it a bit crispier. I find even at U&ME Restaurant, this dish can be a bit inconsistent at times as it is crispier sometimes compared to others. The dish that I really look forward to at Happy Hill is the Braised E-Fu Noodles with Enoki Mushrooms.