I started off the holiday season with an epic feast at ONE18 EMPIRE, a whiskey bar and restaurant, located in the Calgary Marriott. Since they had invited me to try out some of Chef Eric Larcom’s seasonal creations, I left it to the team at ONE18 EMPIRE to decide what we should have for the evening.

Bartender Jenny started us off with a delicious Maple Citrus Old Fashioned which was made with maple syrup, Spanish bitters and Maker’s Mark. 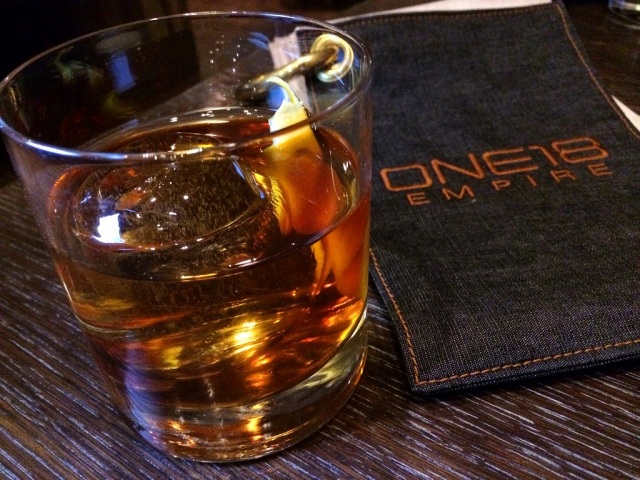 Next Sous Chef Eliott brought us the giant Charcuterie Board, which isn’t usually available on the regular menu but is available for order for large groups and private events. The Charcuterie Board consisted of house made duck prosciutto, pancetta and capicola along with Casey blue cheese from Ontario, creamy Saint-Andre and Oka served on crispy house made lavash. I was really impressed with the house made condiments – blueberry preserve, sweet pickles and especially the sweet grainy mustard which went perfectly with the cured meats. Everything on the Charcuterie Board was so delicious that we couldn’t stop ourselves from eating it, not knowing what Sous Chef Eliott had in store for us for the remainder of the evening. 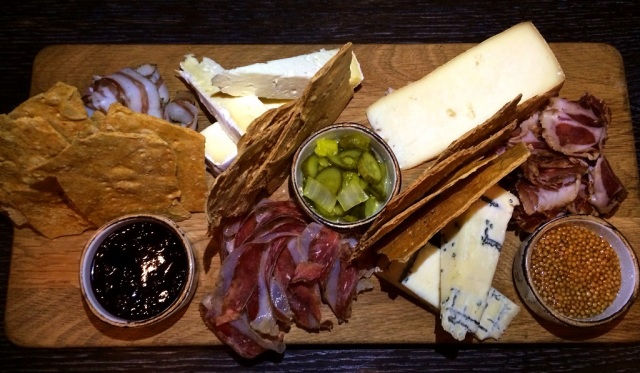 For appetizers, Sous Chef Eliott brought out another huge board for my friend and I to share. This time it was filled with ONE18 EMPIRE’s famous Maple Bacon Wrapped Dates, Honey Bourbon Wings, Bourbon Short Ribs, Duck Salad, and Weathervane Scallops.

The Maple Bacon Wrapped Dates ($6) were stuffed with Gorgonzola and finished with a delicious whiskey syrup. They are hugely addictive and the perfect balance of salty and sweet. I could snack on these all night long while sipping cocktails. The Honey Bourbon Wings ($13) with a house made Bulleit Bourbon glaze and served with a blue cheese dip were finger-licking good. 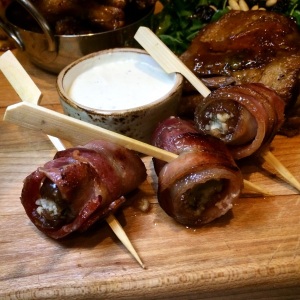 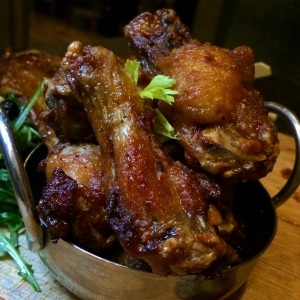 The Bourbon Short Ribs ($13), which consisted of 4-hour braised melt-in-your-mouth tender chuck flat, were stuffed in herbed Yorkshire pudding and topped with smashed peas, goat cheese, pancetta and mint. They are definitely the perfect comfort food for the winter season. 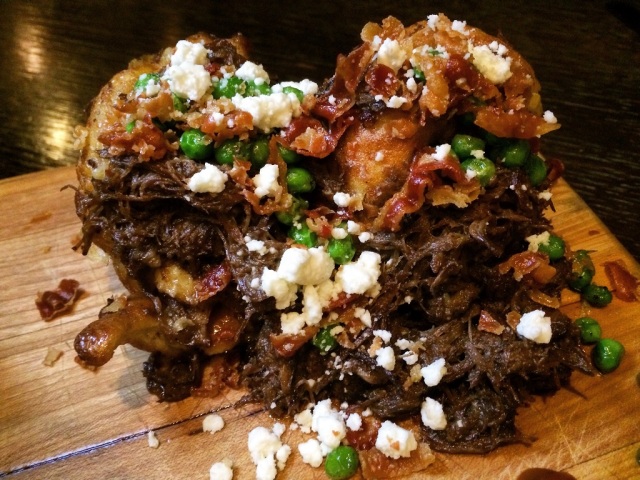 The Duck Salad ($14), which consisted of a 3 hour confit duck leg with a rye whiskey burnt orange marmalade, was served with arugula, currants, and toasted pine nuts.  I loved how tender and flavourful the duck was. This would be the perfect salad for a light dinner. 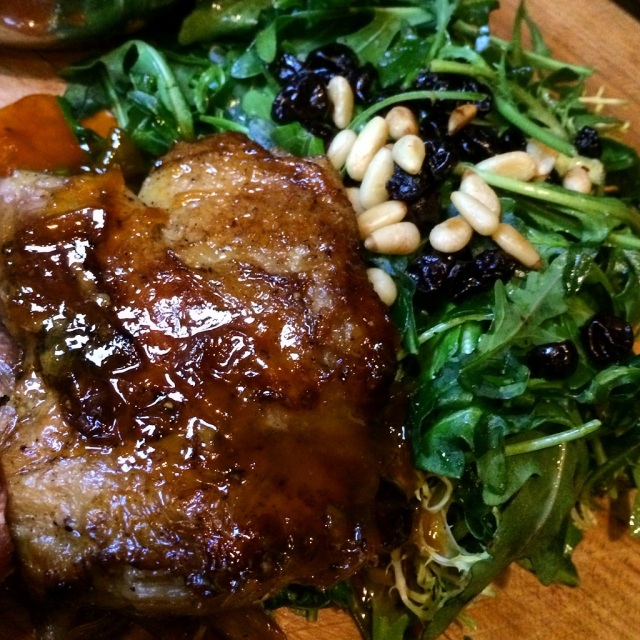 The star of the appetizer round without a doubt were these gigantic Weathervane Scallops ($15 each). These perfectly cooked sustainable scallops were served with 4-hour braised melt-in-your-mouth tender pork belly atop a bed of creamy polenta and finished with a grainy mustard jus and beef demi-glaze. There were simply AMAZING and easily one of the top bites I had in 2015! 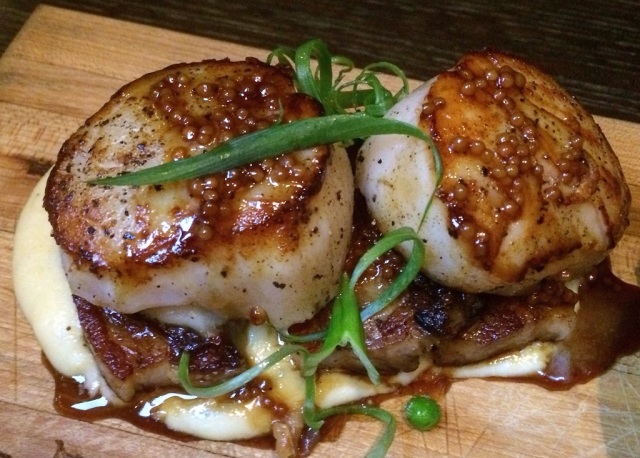 After the epic round of appetizers, we needed a short break so our bellies could make room for the entrees. Our hostess took this opportunity to tell us a little history about how ONE18 EMPIRE got its name.  Did you know that 9th Avenue used to be called Atlantic Avenue back in the late 1800s and Centre Street used to be called McTavish Street? ONE18 EMPIRE is named in honor of the Empire Hotel, which used to be roughly in the spot where the Marriott (and within it, ONE18 EMPIRE) is today and 118 Atlantic Avenue was the address for the Empire Hotel. Many of the cocktails here have a story to tell related to the history of the Empire Hotel, such as the “Near Miss“. 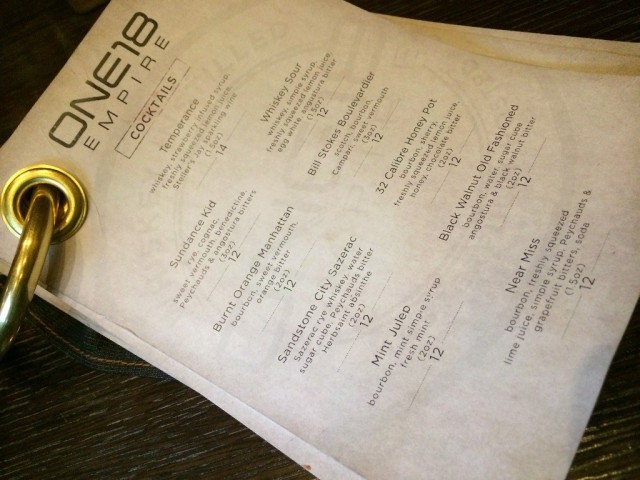 For our second cocktail of the evening, Bartender Jenny prepared one of their most popular cocktails for us to try. The Temperance ($14), which consisted of whiskey, strawberry infused syrup, freshly squeezed lemon juice and Steller Jay’s sparkling wine, was delicious!  It was perfectly balanced and not too sweet. This is easily one of my favourites on the ONE18 EMPIRE cocktail list. 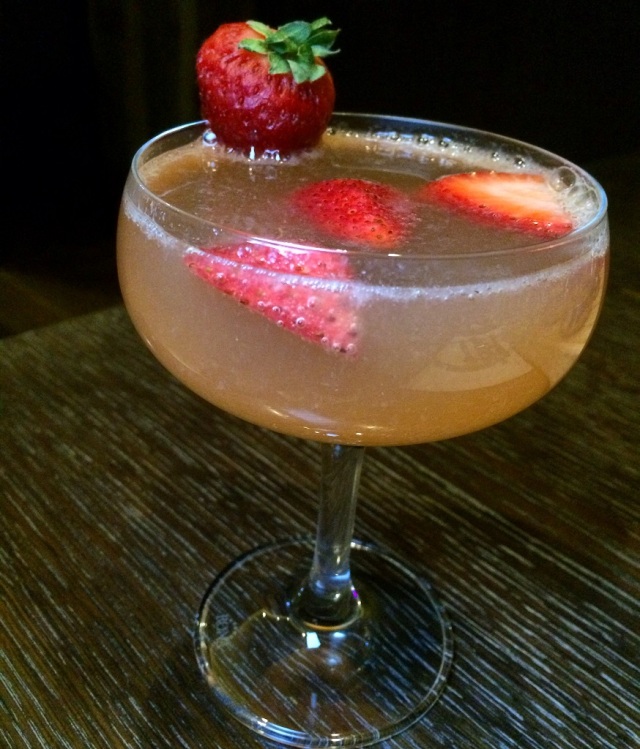 For our mains, Sous Chef Eliott prepared three of the entrees for us to try – the Alberta AAA Ribeye, the Cedar Plank Salmon, and the Grilled Duck Breast.  First up was the beautiful Alberta AAA Ribeye ($34), which was served with spicy Brussel sprouts topped with house made pancetta and creamy tarragon smashed potatoes. The rib eye steak was well-seasoned and perfectly cooked to a medium rare. 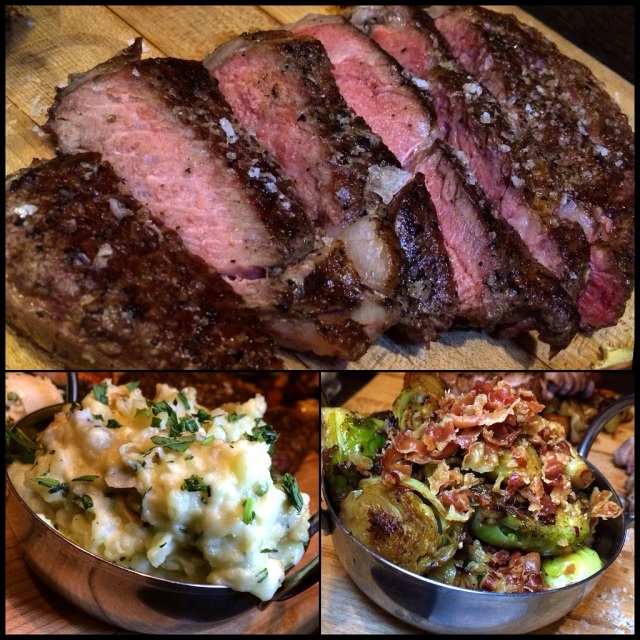 I was quite impressed with the perfectly cooked whiskey-glazed Cedar Plank Salmon ($27), which was served on a bed of yummy broco-cauliflower slaw. It was moist, juicy, flavourful and fork-tender with a medium rare center. This was a stark contrast to the bland and chewy salmon I had as part of a Grilled Seafood Salad from an eatery down the block the week before. 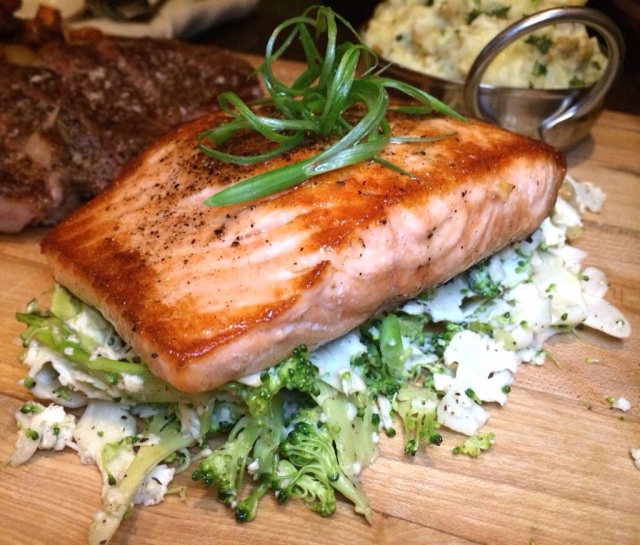 My favourite out of the three entrees was the Grilled Duck Breast ($26), which consisted of a Fraser Valley duck breast grilled to perfection and was served with a flavourful root vegetable hash with bacon lardons and a side of grilled fig jus. 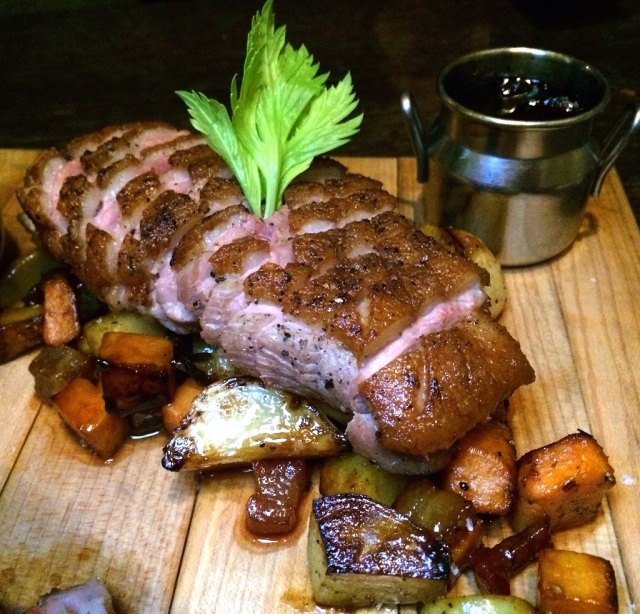 For our final cocktail of the evening, Bartender Jenny gave us a demo of how the Black Walnut Old Fashioned ($12) is made, which included charring the whiskey barrel and capturing the smoky aromatics to coat the glass before pouring in the mixture of bourbon, water, sugar, angostura & black walnut bitters.

The making of a Black Walnut Old Fashioned at @one18empire, which includes charring the whiskey barrel and capturing the smoky aromatics to coat the glass. Thanks Jenny for the awesome demo! #yum #sogood #oldfashioned #cocktails #yycdrinks #yyccocktails #bourboncocktails #bourbonlove #one18empire #amazing #awesome #latergram

Though we were so full, we couldn’t resist dessert.  Sous Chef Eliott brought us three epic desserts to try –  Sticky Toffee Pudding, Triple Chocolate Bourbon Cake, and Goat Cheese Cheesecake. The decadent warm Sticky Toffee Pudding with a hazelnut praline topping was served with a side of Calvados ice cream.  This is the perfect comfort dessert for the chilly winter night! 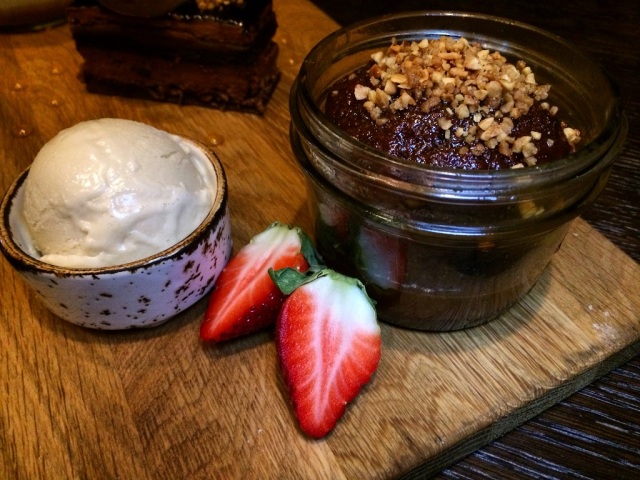 Next up was the  Triple Chocolate Bourbon Cake topped with a mirror finish ganache. Let’s be honest here, who can resist this beautifully presented Triple Chocolate Cake? I know I couldn’t. We tried our best to finish every last bite. 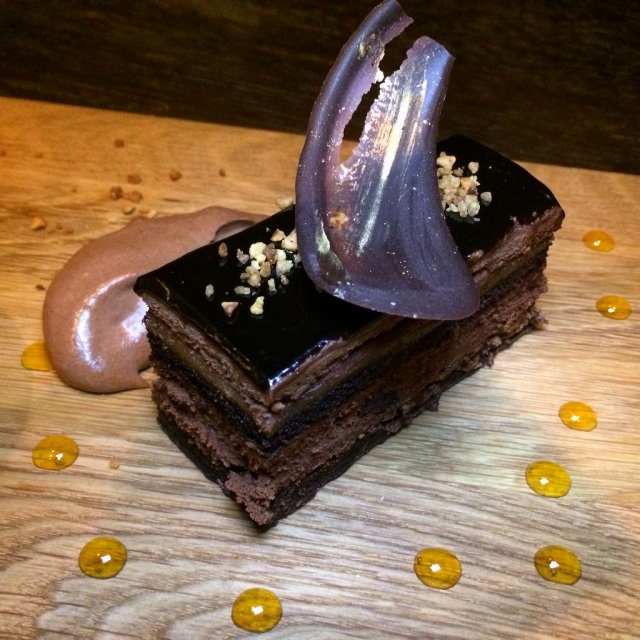 The star of the dessert round for me was by far this AMAZING Goat Cheese Cheesecake topped with bourbon caramel. This was seriously one of the most memorable cheesecakes I’ve had to date! The goat cheese flavor was surprisingly not too strong. It was perfectly balanced, light, and not too sweet. This cheesecake is a MUST HAVE if you go to ONE18 EMPIRE. I can’t wait to be back to have this cheesecake again! 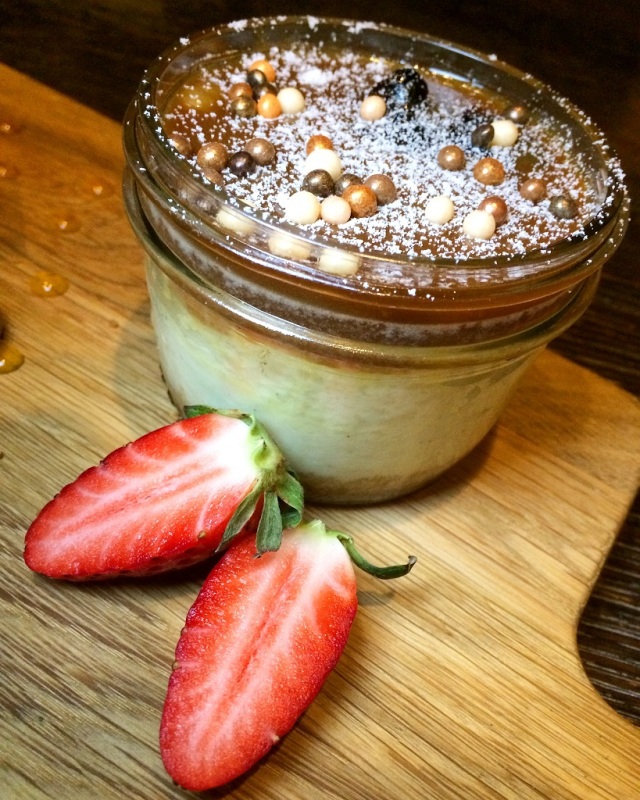